Office of Numpties and Scaremongerers? 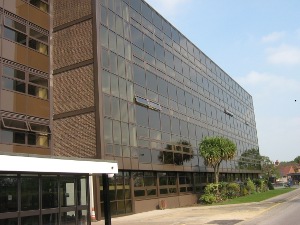 An an economist's job is a very difficult one indeed. You don't want to be the odd man out with your predictions, and yet predictions is your game - and indeed your paycheck.

So how to balance the needs of being right with being seen to be right? it is a common city conundrum that affects everyone from Hedge Funds Managers to Pension managers.

In the world of economists this means closely watching the relevant statistics as they come out, Purchasing Managers Index, Consumer Confidence, Business Confidence etc. The use your advanced excel skills to create a nicely complex model to spit out your opinion of, say, GDP growth.

Once you have this base material you can check it against what every other economist is predicting and move it up or down depending on your hunches and also just check that it is is near consensus, but hopefully not bang on.

So yesterday was a bit of a shock, as GDP cam in 0.3% below consensus and nearly every City economist was wrong. of course, due to the herd behaviour described above, if there is a material difference then it is likely that many will be wrong when the numbers are a miss.

However, the first few months of this year were pretty good and the all the information available suggested pretty strong growth, certainly enough to lift the Country out of recession.

But the Office for National statistics just has not been the same since the move to Wales. As part of the last Government's strategy, the department was moved to Wales. Lot's of people left, not wanting to follow and the quality of its data has fallen. Construction in particular is very variable, out by 1-2% each time, which is huge - more than enough to turn yesterday's GDP positive if it proves to be wrong.

This is why the City analysts are all wrong and, as noted in the Telegraph today, why the Bank of England uses its own model (one has to ask, the cost of this, having two departments of Government do the modelling...).

It is quite a problem though as all these movements in statistics really matter today and when they are all changed to be more accurate in the future, people care less. A root and branch review is necessary of the ONS to try and get some better accuracy in the first place, or even a review on how soon data is released so as to allow them more data gathering time to allow a more accurate first cut.
Posted by CityUnslicker

It could be worse, the ONS could have been moved to Salford...

When the Yes Minister writers asked PM Thatcher if she would like to appear in an episode. Maggie and Bernard Ingham wrote a story line that was made into an episode.

Prime Minister: Ah, good morning Jim, Sir Humphrey. Do come in and sit down. How's your wife? Is she well?

PM: Good. So pleased. I've been meaning to have a word with you for some time. I've got an idea.

PM: Well, not really an idea. It's gone beyond that actually. I've given it quite a bit of thought and I'm sure you, Jim, are the right man to carry it out. It's got to do with a kind of institution and you are sort of responsible for institutions, aren't you?

JH: [Decisively] Oh yes, institutions fall to me. Most definitely. And you want me to set one up, I suppose?

PM: Set one up? Certainly not. I want you to get rid of one.

JH: [Astonished] Get rid of one, Prime Minister?

PM: Yes. It's all very simple. I want you to abolish economists.

SH: [Silkily] All of them, Prime Minister?

PM: Yes, all of them. They never agree on anything. They just fill the heads of politicians with all sorts of curious notions, like the more you spend, the richer you get.

JH: [Coming around to the idea] I see your point, Prime Minister. Can't have the nation's time wasted on curious notions, can we? No.

PM: Quite right, Jim. Absolute waste of time. Simply got to go.

JH: [Uncertain] Simply got to go?

PM: [Motherly] Yes Jim. Don't worry. If it all goes wrong I shall get the blame. But if it goes right - as it will - then you'll get the credit for redeploying a lot of underused and misapplied resources. Probably get promotion too.

PM: [Decisively] Yes Humphrey, were. We're going to get rid of them.

"Construction in particular is very variable, out by 1-2% each time, which is huge - more than enough to turn yesterday's GDP positive if it proves to be wrong."

They probably are wrong about construction Bill.

We've noticed a strong element of the bigger builders contributing to the funding of secure schemes, where in the past, they just wanted tenders on the desk.

So far, the picture is not clear, and I suggest far too complicated to be sorted out, or understood by an economist - or even a politician...

Good point you made there!

If a lot of passt growth is simply money slushed about on spending that creates debits or speculation that fails then if that is cut back theoretically the "growth" figure might well contract. It is a bit like putting out the rubbish. Your possessions may be reduced but you are well rid of them.

in the past we spent too much money we diod not have building schools and hospitals with money borrowed from the future. Now we have them we don't need more of them as they last 20+ years.

so now the construction industy needs to shrink, but it look sbad when a l you measure is growth. Really its good news, we have finished the things we needed and now have them.

You should be in Government.

As an ex-Numptie I can tell you that a lot of work goes into checking various sources so that they can get it right - within the limits of error!

The problem is that the closer to the zero line it gets the more political the numbers become.

Same goes for GDP. Book a couple of major engineering exports in any one month then GDP can vary.

And I thought you lot were numerate!

Perhaps the reason for the problems in the UK is the quality of it's business leaders.

Anon - welcome and thank you for the defence. No doubt it is hard to do, but perhaps the BOE not taking the ONS seriously does highlight some issues with the data quality?

Any ideas on how to improve things?

ONS been dodgy ever since they occupied the same HQ building as Labour.