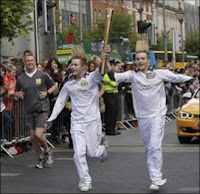 I am pretty much of a curmudgeon when it comes to the Olympics but I have to say that someone - Coe ? Moynihan ? Cameron ? HM the Q ? - played a blinder by deciding to let the Irish have the flame for a day.

Cost to us: zippo - and they loved it ! and are really, really grateful, beyond anything you would guess, nicely consolidating the terrific benefits of the Queen's visit a year ago.  Heart-warming stuff, loads of goodwill towards GB (- if only it were always that easy to please).  You never know, but that sort of thing may pay off handsomely one day soon - Sinn Fein or no Sinn Fein (see post below).  Soft diplomacy ? Why not ?

Of course it was all pretty chaotic ("would you ever imagine if they let us organise the whole feckin ting!") but it was fun for all that.

Everywhere I go outside the UK there is a cheery disregard for elf-n-safety and Dublin is no exception, witness this young lady in her enthusiasm to see the flame pass by her office.  Fair play to her !

Its simply that the upperclasses still see Ireland as part of the UK or at least only semi-detached, and indeed these days a lot of the powers that be do have Irish connections.

yep, fully agree.
some numpties on twitter were moaning though.

Was in Dublin during the arrival of the torch in Stephen's Green.
Lots of interest from the public and the school kids who were bussed in for the occasion.
I think most were more interested in Jedward than anything else though, (whatever you may think of them...)

Always good to see Anglo-Irish friendship being maintsained, and I'd hope we'd have good relations with Scotland if they ever seperated (which I think would be a sad day, but that's for the Scots to decide).

None of the above detracts from the fact that the Olympics is shite, mind. I'll be watching the Tour de France.

I was quite horrified,{although secretly relieved} that after 20 years of the French not giving un singe about 'elf 'n safety, they have finally put seat belts on the rides at Disneyland.

And they check that everyone has one on.

its not very Gallic at all.

I remember reading a stat somewhere that the UK has some 20,000 jobs in the health and safety industry and another 100,000 supplied by it. With certificates,books, courses etc.

The French had none at all.
But they must now have at least one.

Perhaps they are now aware that - having 'struggled' against the English for all of these years - that they have submitted to rule by Germany.

I doubt they'll see the irony of their situation. I doubt anyone who is swayed by a mere gesture will ever see it that way in fact.

The upper class do not rule Britain. The upper middle-class do.

They are most definitely against colonialism of any sort.

"
The upper class do not rule Britain. The upper middle-class do.

No, the upper classes rule Britain - they just do it from Jersey, New York and Monaco so you don't see what they're up to. God knows they wouldn't want to be in Blighty with all those smelly chavs and immigrants paying high taxes. We are just a money making machine for them.