FSA & Bank of of England drawn into mess 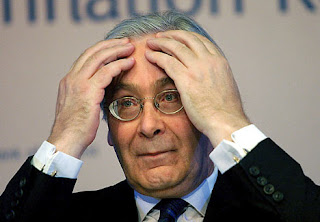 It has not taken long for the LIBOR scandal to become a little more complex. Many banks were involved and even were speaking to their customers. LIBOR ceased to have much meaning in 2008/9. This was blamed on the Financial Crisis - turns out that was an inaccurate generalisation.

It seems so unlikely that so many banks could be implicated without the FSA and other authorities knowing that something was amiss - already it seems as if maybe 100 people will be directly involved. Not a small number.

So now the focus will switch quite rightly to the regulators and their role in condoning or ignoring what was going on in the LIBOR market. I doubt this is going to go well for the regulators 2008 after all was a busy year for the FSA and BOE and an quite inglorious one. Mistake compounded upon mistake from 2007 onwards.

As I wrote on Friday, it won't surprise me to find the regulators as much at fault as the Banks for this. With the markets dying in the liquidity crunch anything, even deception, that could hold together the global capital markets would be a good thing. The UK did not need Barclays joining the SOE (State Owned Enterprise) club - nor will the US have wanted more Lehmans collapses.

So the interesting piece will be the blame game and who gets caught up in the end. Mervyn King is retiring soon anyway and it won't be all that amazing if he does a Marcus Agius to try to carry some of the can.
Posted by CityUnslicker

As I said before - the damage, the excesses and the corruption of the unions in the '70s were nothing on this.

"Bash the banks and bring them down!" Ironically we commoners didn't need to bother - they are doing it to themselves and quite effectively :)

Occupy should pick this up - "We told you so - nothing specific it's the whole shebang!"

generally I despise murdoch and all his works

but I have to add my approbation to the chorus of approval for "SIGN ON YOU CRAZY DIAMOND!"

(not sure quite how many Sun readers we'd expect to understand it ...)

I can just imagine the BoE giving all the banks a nod & wink about Libor rates. "keep the numbers down a tad, old boy. Be a trifle awkward if mortgage rates went up when we're shoving the base rate down and printing money, eh?"

but this is the point, in really liquid markets like that all Barclays (alone) could ever have hoped to achieve was a few BPs

so I don't see how it could be for national/strategic ends (again, of they were acting alone) - only tactical, for their own gain

& some of the emails indicate they were trying to bid it up, which seems to confirm my point

BoE quite handily took care of the big numbers!

Isn't the point that the market wasn't liquid? The banks weren't lending to each other at all. So LIBOR rates as published were a nonsense anyway. It seems to me they must all have been doing it, giving bullshit numbers to the BBA.

SW - That is entirely right.

ND - There are 20 banks involved, en mase it adds up to more than tactical. Barclays are the whistleblowers...(this is a very bad advert for whistleblowing if your reading this anyone at FSA/BOE - own up first and we send you to the dogs, your management have to go and no one will remmeber other banks were at it too - many congrats, they'll be lining up to help you more outside 25 North Colonnade).