Pick a cad..put your cad back in the pack. Shuffle the pack.. 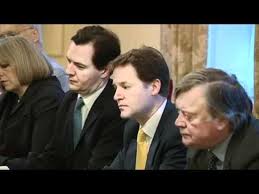 That long awaited reshuffle must surely be due by the end of the summer. Euro cup, Wimbledon, Olympics, reshuffle. That's the sporting calendar.

Constrained by coalition David Cameron decided that it would be easier to leave everyone in place unless they forced themselves out of a job. So his few changes have been by push or fall. David Laws. Liam Fox. Chris Huhne.

Reshuffles are slate wiping exercises.  And since the worst budget in living memory {assuming living memory only extends to the final budget of Gordon '10p' Brown in 2007} the formerly patchy at best coalition slate now needs a total hosing.

The government is in a mess. The cuts aren't cutting. The growth isn't growing. The reforms aren't reforming. Own goals. U-turns. Leaks. Domestic squabbles and rebels, plus unremitting 24/7 negative media coverage, will end the coalition before the pre-nup 2015 agreement. Unless Dave can get a grip. And that means the weak and the ineffective need a Thachterite '81 style pruning.

Not easy in a coalition. Not easy with pretty dismal economic news. Not easy with the planned cuts to department budgets and the real spending halt soon to begin.
But Mr Cameron, you wanted the job, so .. do it or quit.

We'll look at the cabinet later on. For now just the big issue.

The biggest problem is the almost insurmountable one. The Chancellor has lost the plot. The man who's job it is to reassure us all has lost the nation's confidence.
Until the budget of 2012 the Ed Miliband/Ed Balls dream team was rated only slightly above a Greek finance minister for economic competence. But in June  the “most capable chancellor” ratings gave George Osborne 36% and Ed Balls 37%.
The Tories are hoping its just a blip. It might be. Ed Balls is about to suffer on the Libor rate scandal as it gets bigger and more worms are found in the skirting board. The woodwork that was treated with FSA Ronseal. Doesn't exactly do what we said on the spin.

Despite Osborne's fumbling to pin the blame on the donkey, Balls will eventually have some questions to answer.  But hurting Balls doesn't necessarily help Osborne.
Some have suggested that Osborne ditch his duel-fool role as Purse Holder and Tory Chairman, and spends less time as a strategist and more as a penny-pincher.  But Osborne excelled at the strategy game before the election. The inheritance tax gamble not only ended Brown's bid for a five year term,  it finished Brown as a man of conviction and directly led to all the relaunches, bumbling, U-turns, dithers and coups that marred the entire premiership. Osborne should be Tory Party Chairman but leave the office of Chancellor.

Not an easy task to swap chancellors. Since 1986 there have only been seven chancellors of the exchequer. Since 1996 there have been more elections, than chancellors. And the coalition has staked its reputation for reelection on being 100% right on the economy.

To axe the chancellor who  embodies those policies would be such an admission of failure it would hand the next election to the reds.


One of those former era chancellors is still around in politics today. And by happy coincidence it was the most successful one. When chancellor Ken Clarke put a new monetary policy into effect and reduced basic rate income tax from 25-23%. The budget deficit fell from £50.8 billion in 1993 to just £15.5 billion in 1997.
The holy trilogy of inflation, unemployment and interest rates all fell. So golden was the legacy handed to Brown/Blair in 1997 that ..

Clarke's successor, the Labour Chancellor Gordon Brown, continued these policies, which eliminated the deficit in 1998 and allowed Brown to record four years of budget surplus' 1998 - £703 million, 1999 - £12 billion, 2000 - £16.7 billion, 2001 - £8.4 billion. .. Clarke's success was such that Brown felt he had to pledge to keep to Clarke's spending plans in January 1997, ahead of the election. Clarke's spending limits remained in place for the first two years of the Labour government that was elected in 1997.


Recommending a replacement chancellor who has a track record that labour followed not just in word, but in deed. Who has the most experience of anyone in the cabinet. Who has already tackled recessions and cuts and social disorder and Europe, yet managed to make the country stronger despite all those problems shouldn't be too hard to spin.

A euro loving chancellor might be a bit of problem for Mr Cameron and his anti-eu rebels, but would be welcomed in Brussels and Berlin, where UK has few to no friends.
And Cameron can always flip-flop. A referendum on EU membership is going to crop up as an issue before the election. Labour have it in their dirty tricks box already. Waiting to deploy it to split the Tories from UKIP just months before the next election. As long as Cameron has Clarke reconciled to that referendum promise that is going to have be made politically, however insincerely, they can appear united on all other fronts.

Cameron could slip old Ken into the Treasury and accept the U-turns and 'Plan B' jibes from the Miliband benches but with a  full ammo chest of his own retorts.


'The incompetent lecturing the competent. The students hectoring the master. The most accomplished chancellor in modern times has nothing to answer from the least accomplished. Mr Miliband..the photocopier of Gordon Brown's failed economic policies.."


"I refer the muttering Hon Member  for Morley and Outwood to the years 1997-2000 when Ken Clarke was still ensuring wise, capable and fruitful policies were enacted by Mr Balls'  former master, even though Ken was no longer the chancellor! "

Well they need to do something as the situation at the moment is lamentable...

AND (assuming that Clarke didn't totally starve the Justice system of cash) it would get rid of one useless, flabby justice minister - that same Mr Clarke who wants to let all the criminals out and destroy the police.

You'd think the Tories would want the police onside, as Thatcher wanted them onside. Clarke reckons we can do without them.

So basically, Lord Quango, you are saying get KC in to cut the budget deficit not by *raising* taxes but by CUTTING TAXES ?

In the language of the usual dreary 'the state budget is like household budget conventional 'wisdom', the Govt deficit would be *reduced* by *reducing* it's 'income' ??

Aren't we being a wee bit over sophisticated for the average Tory ( or even Labour) voter, here ?

Is this suggested policy really idiotic enough to be an easy sell to notoriously deep Daily Mail readers , for eg ?

It's certainly not mental. One has to wonder what on earth was going on in Oik's head to present such a pisspoor budget and one's left with the notion that he just didn't put in the work required. When his Chief Secretary is under qualified to serve ice cream at the local fete then it's departmental shit like that which takes on added import.

I like Ken, always have but if Blair didn't sack Brown then I guess we can safely assume that Cammo won't move Oik.

Hmm. Given how deeply unpopular Brown/NewLabour were before the election, I'm not sure how ending up with the coalition qualifies as any kind of strategic success...

Osborne needs to go. Clarke would be welcome. But let's not kid ourselves that anyone is going to lay a glove on Balls over LIBOR. Even if evidence does come out, as opposed to speculation, he's got the perfect public interest defence; 'yes, we stopped the made-in-the-USA banking catastrophe leading to total systemic collapse and we kept mortgage rates down to stop a repeat of the Tory repossession disaster in the early '90s - vote Labour and keep your house'

Given the unbelievable money printing, gold price manipulation & interest rate manipulation by central bankers I am astonished anyone gives a shit about LIBOR. It's trivial.

Anon 1152. yep, something must be done. Labour prepared in opposition for a hostile press and determined never to admit to anything remotely unpopular and publicise the most trivial of their doings.

Cameron needs to remember he faces a hostile press.Get someone who can deal with them.

Anon 12.10 Been a bit inconsistent at Justice. The police have been allowed to get away with loads under the Thatcher/Major/Blair/Brown years.
but they've also had a lot more to do.
If only there had been competent senior police chiefs. real firebrands how would have told the Home Office to stuff their social worker policing.

Anon 12: 44. Erm..No. I'm not suggesting that at all. Have you turned over tow web pages by mistake?

DP: I like Ken too, despite myself.
Probably because he sounds so plausible and doesn't bother with the shouty, pointy, politics anymore. just says what he thinks is the situation and the remedy.

The Tories failure began the moment they mentioned cuts. It was a big mistake. Dave should have followed the New labour play book. Promise the earth. Any goal, any bribe and any amount of opponent smears to win.
Cameron should have said we'd all get a 12% pay rise in 2012. Elections are all lies anyway, so why not?

Seb - its not libor. its the feather touch regulation that will snarl Balls. As more and more wrongdoing emerges some of the mud will stick. Not really enough, but it can only help George.
If not Ken then who? Cable? {!! Only Vince thinks it could be him}
Hague?
Hammond?

Not looking good is it?

Mr Osborne will be chancellor at the next election.
It is impossible for the coalition to ditch him.
Even more impossible than it was for Blair to ditch Brown.

George is inner circle. He's the number 2 . He's Cameron's staunchest ally. He underpins the entire economic foundations and policies of the government.He sets the strategic direction.

Unless he suffers a catastrophic mental or medical emergency, he will be chancellor after the reshuffle.

Well that really would be the end of the Tory party in terms of any sort of popular support.

otoh perhaps that is not a bad thing; we need a clean slate and a new start, by God we do.

Given that we are, on paper, in as bad a situation as Greece, but in fact the government has managed to keep unemployment to acceptable levels and convince the markets we are serious about getting debt under control. They are doing about as well as anyone could hope, in these circumstances. What did you people hope for, heaven on earth???

Wake up and smell the coffee. In real terms the UK is in the process of rising to the top as Europe and China sink under their own foolhardy policies. Give it ten years and there will only be the UK and USA left standing.

Not sure about the USA though anon.

Its election year and Barack's going to make a load of crazy promises. And his challenger will make even bigger ones.

The US is going to weigh itself down with unaffordable freebies for the poorest 1/3, not being paid for by the richest 1/3.