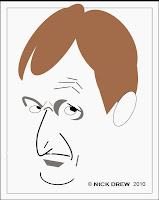 So Peter Oborne hasn't delivered his promised revelations about Alastair Campbell's evil doings.  Small boy offers to grass up big bully, but then he doesn't.  Whatever could have happened there ..?

And what were our closing words of encouragement for little Peter ? No last-minute failure of nerve, now ...

is it possible he had nothing?

roym - improbable: journos like that have long and accurate memories and good filing systems

(aside from Private Eye, actual mainstream investigative journalism these days is the sole prerogative of Mr M.Crick, the only man who can be arsed to research old primary sources, make visits to obscure addresses in provincial towns or even make 'phonecalls to forgotten players and past witnesses - a good recent case in point being the MacAlpine affair when he was the only journo to adopt the simple expedient of ringing the old buffer up! - bloody amazing: and shame on the rest of the profession)

And wasn't it Crick who discovered that the "witness" in the bikegate saga was another policeman ?