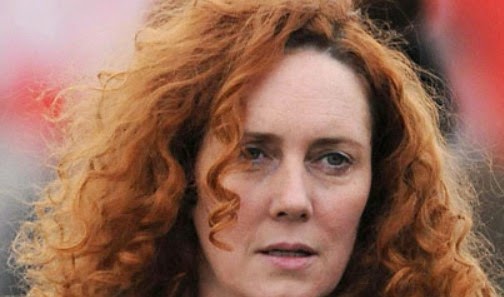 Yes, he met her too.  Oldest story in the world.

Incredible that she got off.

She must have some stash of photos of herself and.....

Never mind her getting off. Mr Brooker was the real surprise.

I know my defence in future. In fact I might fly over to the US and help out with their 'missing' IRS emails problem.

Ooops.. not Brooker, the TV producer, writer and journalist...

What we the people need is a thicket of regulation so complicated that the courts can find anyone guilty of something if that person attracts the general disapproval of the state/media complex.

their tax decrees are so complex and indeed in many cases mutually contradictory, that you cannot fail to be guilty of something at all times

you know it, they know it - you can be hauled in anytime

Not only the Russian, sadly :-(

English law is pretty much dead in England.

Nick, in fairness to Ms A-B, her primary and secondary education took place in Uganda, where the struggles against slavery, the Triangular Trade, Rosa Klebb at the front of the bus, the hypocaust, lynch-mobs and the Nazis probably took up less of the curriculum than they would have done in the UK.

In fairness to Mrs A-B this country gave her shelter from Idi Amin's goons and she repays the hospitality, figuratively speaking, by defecating on the living room carpet.

2 things about A-B, the 1st of which has nothing much to do with schooling:

- she puts herself up as a pundit on foreign afairs subjects like Russia/Ukraine, knowing less than would be expected of any literate person taking even a passing interest in Russia: the matter in question is not even remotely obscure (OK, more fool the BBC ...)

- she claims a good British education! whether this was in a British school in Uganda, or (IIRC) India, it's her claim

She'll come, she'll go
She'll lay belief on you
Skin sweet with musky odor
The lady from another grinning soul

Caught Billy at Wembley Arena in the late 80s. Such a wonderful entertainer as well as a superlative songwriter / musician - told us his response to those who question why he carts a (baby) grand piano thousands of miles rather than makes do with a synthesizer is that "you can't stand on a synthesizer" (well, I guess you could but it wouldn't be advisable). He then stood and plonked about on it. I'd like to see Meatloaf try that.

Thanks to you headline and its subject matter, though, I'm not sure I'll listen that masterpiece of heartfelt melody the same way again.

And to andrew [sic] - LGS is indeed sublime.

Oh, and just how DID she get off scot-free? Or has she? Please tell me it's not all over. Someone say it isn't so...

Meant "Thanks to your headline", of course (really should make better use of Preview) in my post of 11:01 PM today!

no probs Mr Spag - we guessed

happens to CU all the time, see his complete works passim