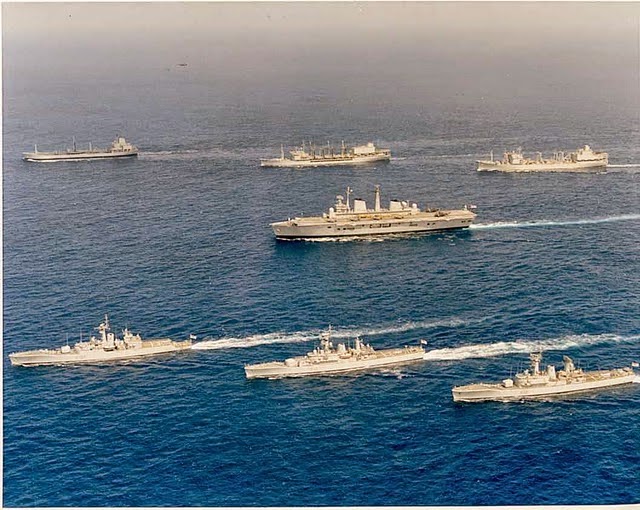 The United Kingdom's Task Force to recapture the Falkland Islands had set sail from the last reasonable hope of no conflict point, Ascension Island, on the 18th of April. By the 23rd April the fleet was still seven days sailing away from the 200 mile exclusion limit that the British government had imposed around the Islands.

The Argentinians had been shadowing the fleet for a while. ARA Narwal an electronic surveillance trawler, of the cold war type nations used to add to their fishing fleets, had been dispatched to shadow the ships. Along with their diesel electric submarines they were to monitor the progress.

The Argentinian air force also decided to overfly the Task Force using Boeing 707 civilian airliners and Lear jets in a reconnaissance role. On 21st April a 707 was  spotted by radar and a Sea Harrier dispatched which shooed it away. Commander Woodward contacted Westminster and made clear that he wanted the rules of engagement changed, so that the actual task force, and not just the 200 mile exclusion zone, should be considered a war zone. Meanwhile the Argentinians continued their reconnaissance flights over and around the Task force

The UK War Cabinet politicians saw the danger and so for the safety and security of the military they issued this communique to the Argentinians.

On 23 April 1982 the British informed the Argentine government that..
"any approach on the part of Argentine warships, submarines, naval auxiliaries or military aircraft which would amount to a threat to interfere with the mission of British forces in the South Atlantic would encounter the appropriate response."
At the same time it stated that ..
"all Argentine vessels, including merchant vessels or fishing vessels apparently engaged in surveillance of or intelligence gathering activities against British forces in the South Atlantic, would also be regarded as hostile."

On the same evening, 23rd April, a high altitude contact was detected heading directly towards the Task Force. Fleet Commander Admiral Woodward ordered his new powers to be used and the target to be destroyed. A Sea Dart anti-air missile was prepared.

Less than 60 seconds to launch Woodward noticed that the plotted course of the intruder held a direct course from Durban in South Africa to Rio de Janeiro, in Brazil. He cancelled the attack and instead sent a Sea Harrier to investigate.

The Sea Harrier discovered the "Intruder" and correctly identified it as a Brazilian airlines DC 10 with over 100 passengers and crew on board.


How public opinion would have reacted to the first UK response to the invasion being the shooting down of an unarmed, neutral, airliner in international airspace was luckily never discovered. Footnote
the Learjets were used as decoys, pathfinders and raid leaders as they were equipped with such superior  navigation systems. A Learjet was shot down near the end of the conflict by a Sea Dart missile from HMS Exeter.

The surveillance trawler was badly damaged by Harriers and captured by the SBS. Taken under tow it sunk.

A Boeing 707 reconnaissance mission by the Argentinian airforce was attacked by 4 sea dart missiles on the 22 May and miraculously evaded them all. But no more missions by airliners were attempted.

The Sea Dart was a capable missile at high level but was affected by 'clutter' from the waves at sea level. Only 11%  hit targets at low level. The Argentinian's were well aware of the Sea Dart/Type 42 destroyer radar limitation, having two Type 42 destroyers of their own. So Argentine pilots flew very low, which is why so many of their bomb hits failed to explode.
The Exeter had a newer, better,  radar system.
Posted by Bill Quango MP

Had me going for a bit there.

The sea dart was a bloody useless missile.

Could have been worse Weety.
The county class ships had Sea Slug.
That was so obsolete it was only fired once at an aircraft in the conflict. It missed. They RN used it for shore bombardment during the invasion.

Seacat was old too. originally it was the replacement for 40mm WW2 era AA guns.

Seawolf was the newest missile system. Shorter ranged but more accurate. It worked, when it worked. But had technical difficulties. And there just weren't enough ships equipped with them.

I'm having a bit of a Falklands revival at present. Its far enough back in time now that there are a lot more objective sources and the release of papers etc.

Awful lot of myths have grown up about the conflict, in a relatively short time.

One thing I'd not seen before is the newsweek headline- rather good. I'll stick it at the bottom.

The history of british missile development has been a rather dispiriting one. Rapier/Seawolf were the first decent ones we ever had.

Speaking from a Crab Air POV, if the Yanks hadn't given us the latest sidewinders, we'd quite likely have been toast. Scary thought, eh?

"if the Yanks hadn't given us the latest sidewinders": a sobering thought, given how many people in the US govt wanted to side with the Argies.

With a lot of secrets out there people can never deny why there are so many inspectors.
travelersrvreno.com |

I recently came across your blog and have been reading along. I thought I would leave my first comment. I don't know what to say except that I have enjoyed reading. Nice blog. I will keep visiting this blog very often.
www.amnutriologia.org |