Have you ever really voted in a UK General Election? 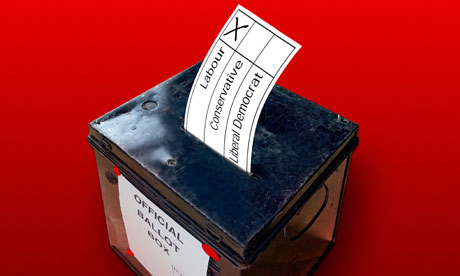 When I went to vote this morning, as ever, my vote will mean nothing. In a completely safe Tory seat my vote makes no difference whatsoever. My other half thought hard before voting about who to choose and yet really, why bother?

Moreover, I am 39 and have had the following election history

When there was a referendum for Alternative Vote I was dead against that form of voting and changing First Past The Post for what is a hodge podge system of AV.

Now though, with FPTP well and truly broken by the regionalisation of politics in the Country, we surely need to do something more. Even in this election only around 15 seats will change hands, one quarter of the amount available.

No wonder everyone is so bored when 75% of people have meaningless votes in any event.

Surely some of my readers have had a better time of it, or is my experience all too common?
Posted by CityUnslicker

The election will be decided by fewer than half a million voters.

I agree, we need something new. First choice would be a directly-elected PM, with a smaller Commons based on a multi-member constituency system. If that is too racy for Britain, let's have a regional list system, but with smallish regions.

well to give a contrasting voting history ...

1987 (different constit) an odd one: it was the Speaker's seat ((Weatherill), but against all precedent Lab fielded against him, thinking that the demographics were heavily swinging their way. They were right about that, but were crushed anyway, like the cockroaches they were - everyone loved Jack Weatherill

So - the Drew block-vote of 2 (or at least, our efforts) have actually mattered in 9 out of 11 general elections (actually the block wasn't operating in 1974)

Who fucking cares? You pitch up, vote for what you like. In the end it all averages out. And stop fucking whinging about the system. It's not for the benefit of the politicians; it is there to let us throw the bastards out.

If you change the system to AV you just allow PPE twats to decide who runs the show. Fuck 'em

Born in Liverpool...doomed for much of my life.

I can rest my weary feet

What a happy day.

My vote really matters because it is the harbinger of doom. I have supported Michael foot, Neil Kinnock, John Major & recently Nick Clegg. Pay me to sign up for the party that YOU hate!

Try living somewhere where you are in a minority and if you were to put up a poster in your window of the party you want to win you would likely get a brick through your window. That's a very lonely position and again your vote doesn't count.

I speak from experience. Today I am happy!!I now live in what was a marginal seat and my vote yesterday counted.

Jan, on my estate party banners are banned by the leases. It's quite a good rule in my opinion.

Politics, religion, and lots of other things are personal matters not to be emblazoned all over the shop.

Agree BE. I wouldn't have put up any posters etc anyway but it would have felt better to know I could have and also there was no-one to have a political discussion with as they were all NewLabour with a vengeance with no hope of seeing reason.