Jeremy, Karl and their Little Friends

Some more musings over just how potentially revolutionary is the situation that may be brewing in the triumphant Corbyn / McDonnell / Momentum camp, as clearly lots of their fan-base believe it is.

Let's start with little Paul Mason, tipped to be a major force in the renewed Corbyn leadership team.  An unabashed marxist, Mason has spent much of the post-2008 period eagerly spotting revolutionary straws in the wind all over the northern hemisphere - but at the same time, as a good journo with at least some regard for the facts, he's been fairly honest in reporting just how disappointing it often turns out to be.  In his more sober moments he even thinks modern youth movements don't actually have what it takes - stamina, attention, focus, discipline, commitment etc - which must indeed be pretty disappointing (particuarly for an old stalinist like McDonnell).   Still, hope springs eternal and Mason's hoping.

So.  Let's rehearse what Marx actually said.  Drawing a kindly veil over his labour theory of value, we should recall he gave a cracking account of the superiority of capitalism over all that went before and, in socio-political terms, warned of the potential dangers of gross and accelerating inequalities in society: inequalities which, he reckoned, were an inevitable long-term outworking of capitalism.  There are plenty today, including many who are not remotely marxist in outlook, who'd agree with him on the dangers, if not the inevitability.

Marx then went on to blow his credibility for most people by concluding that the conditions he asserted were necessary and sufficient for the Revolution to happen, were already present in the 19th century.  That, coupled with the history of the century that followed (when the only instances of 'communist revolution' occurred in agrarian societies! - not at all what Marx envisaged) pretty much scuppered him in polite society long before the 21st century came around.

His conditions for revolution?  That the working class becomes so impoverished - not just relative to the "1%" but in absolute, subsistence-level, on-the-breadline terms - and, at the same time, capitalism becomes so dramatically productive and generates so much surplus wealth, that the workers grasp intuitively that any change in political power whatsoever would leave them better off.  Oh, and that this will happen at the global, not national level.

There are one or two compelling reasons why we ain't there just yet - not while the workshop of capitalism is managed by the Chinese 'Communist' Party! - whatever the average Momentum supporter hopes or believes.  Their own theory, for those that have any political theory, condemns them as bourgeois dilletantes.  Coincidentally, many less theoretically-inclined observers have reached the same conclusion: idle middle-class w*nk*rs.

Which brings us to little Owen Jones who, to do him credit, is also showing signs of Monbiot-Mason syndrome, i.e. on a good day he feels obliged to notice the truth.  He wants to believe: oh, how he wants to believe!  From the Graun: 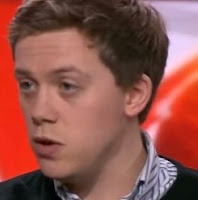 After his victory last year, Corbyn’s acceptance speech was criticised for having little to say about reaching out to the country as a whole. Not this time. He was passionate in his calls for unity: “We’re part of the same Labour family,” as he put it. No retribution, no bitterness. He made it clear that Labour was in it to win, would take it to the Tories and focus on developing a compelling alternative. He looked like a leader.


The Labour movement now brims with anger, mutual distrust and looming internecine warfare ... if this fury is unchecked, then Labour will implode as a political force.

What can be done to keep the show on the road?


Hope for the future lies with critical friends of the Labour leadership. They will be attacked by all sides. The uncompromising anti-Corbyn wing will see them as naive accomplices of electoral oblivion. The most ardent leadership loyalists will see them as naive capitulators to saboteurs who will never accept a left-led Labour party. In such a polarised atmosphere, nuance is regarded as flip-flopping, fence-sitting, standing in the middle of the road and being hit by traffic in both directions, to paraphrase Nye Bevan. But whatever derision they face, critical friends are pivotal to both the survival and success of the left in general, and Labour in particular ... Critical friends are critical not because they want the left to fail. They are desperate for it to succeed. Ignoring challenges and problems, and pretending when things go wrong that it is always the media and the parliamentary party to blame, will lead to terrible defeat.

I think we may safely guess who's volunteering to be the critical-friend-in-chief.  Well, the way you put it, it sounds like a really tough gig Owen - but someone has to do it, eh?  But that does rather imply he's no longer to be counted among the ranks of the faithful.  And it's only been going a year.  Maybe not the revolution, after all.

don't forget the misogyny. This will be the real fail I think for them, along with their pro-islamist support. where will they ever get the votes when they set out so resolutely to lose the ones they already have!

In terms of prerequisites for revolution, I rather think that Marx was completely correct; you only get a revolution when the vast majority of the people have absolutely no other option other than death by slow starvation. The thing to remember here is that most of the population of any country are adults, and the overwhelming majority of adults are heavily conditioned by instinct and society to be peaceful, law-abiding and non-revolutionary people.

To get a revolution you have to leave these heavily biased to peace people with no actual option other than to revolt, or you have to deceive them into joining one side or another in a civil war (which isn't exactly a revolution).

I would contend that a reasonably free and fair democracy is proof against massive revolutions partly by being free and fair, and partly because an election is sort of a revolution-lite, whereby the people get to have their say on a regular basis, and get the chance to boot out incompetent or corrupt politicians.

With regular elections of the free and fair variety you never get that slow build-up of pressure and inevitability that leads to a revolution.

This then means that Corbyn and his deluded followers are doomed to provide somewhat brutal entertainment for the rest of the electorate over the coming years. This is in part due to stupidity and neglect of Labour's Scottish heartland vote, which seems to have felt so abandoned that it switched to the SNP. This manky assortment of socialist-nationalists have already managed to demonstrate that their word is valueless and that they cannot keep promises even if it is in their best interests to do so.

The SNP also show no inclination to ally with Labour, so until such time as the Labour Party schisms into a lefty-centrist vaguely electable group (which then merges with the Lib-Dems) and an ultra-lefty deluded revolutionary nutters group, we shall be left with the Corbyn-the-walking-disaster roadshow.

I don't think you should draw a veil over the Labour Theory of Value. It's a gigantic turd at the centre of Marxism that has skewed the mental processes of every generation since it was first put forward.

It's central to every economic concept of modern day interventionists.


Whenever marx is mentioned, I must provide a link to someone who would be up there with Marx (imo) if he ever got around to writing a book

I think Corbyn is dangerous in that he does have a habit of running elections where he has a lot of control over the result (his own leadership), and pointing out that the cons only got 25% of the electorate to support them or reducing the importance of parliament, whilst supporting mass movements.

If you keep on running elections that mean nothing, holding mass meeting where many fine speeches are made, and nothing changes, some people will become really upset and will consider the whole system broken.

So I think in a small way he has worked out he cannot win an election, and so is trying to change the game to one he can win.

Huge belly laughs, as the Rip Torn character used to say in the wonderful Larry Sanders Show. Best show in town, the Conference has been - I shall miss it when it's done. We've been rolling in the aisles.

doomed to provide somewhat brutal entertainment ...
- welcome, Dan, and I must agree: being incapable of mounting the revolution certainly won't stop them from making merry on the streets

he even qualifies as a philosopher at the margins, just about beating Nietzsche to the punch with a persectival epistemology (albeit he is a more conventional Realist at heart)

you can see the personal attraction for Corbyn to stick with the adoring crowds: but that's a very unlikely route to Real Power (which is all McDonnell cares about) in a country with a pretty durable parliamentary democracy, a system that house-trained the fairly radical, burgeoning 1920's Labour Party in about ten seconds flat

as far as I can see, a self-destructing UKIP is the only good possibility in their scenario-book: what on earth can bind them together with the SNP? (that's a genuine qn, BTW - answers on a postcard, please)

what on earth can bind them together with the SNP?

Well you've all seen Braveheart. I'm thinking specifically the bit where the armies are lined up and the messenger rides up to the Scots nobles to offer King Edwards' term, land in Yorkshire, that sort of thing. But Wallace demands they march South apologising to every Scot they pass for centuries of rape and pillage.

There's only two sorts of Labour leader the SNP would get on with. A Scot, like Brown, or a self-loathing Englishman. Like Corbyn I guess. As it happens I've heard a fair few SNP supporters say good things about him. He wants to ditch Trident as a starter for ten.

Labour will never win another election without the basketful of Scotch seats it took for granted for so long.

Jezz is a big fan of the armed struggle so expect him to declare a Labour jihad for Scotland against the English oppressors.

Seamus organisers the kneecappers to take out Sturgeon.

Jezz waltzes into Number 10 with a 2 seat majority.

You read it here first...

Was Keith Vaz the finest warm up act?

My chum's from Wallessey and I tried to get him to pop along but he was having none of it. Boring git! Comedy gold.

You don't wanna be warmed up by Keith Vaz, Dick. Seriously. Not with an organ like yours, mate. Ask anyone in Leicester.

And so to the one party state by default.

"Why don't you fuck off and join the Tories" is polite these days. They're bored.

Fair play to Corbyn for consistency and integrity, even if his politics are bloody awful. The Blairites are calling for him to make some tough noises on mass immigration, a bit of the "I feel your pain" stuff that Blair did so well (as he stabbed you). Nothing you've any intention of implementing, mind, any more than Cameron meant his "tens of thousands".

But he won't lie like everybody else, and that drives them crazy.

"Don't you want to appear electable?"

"Appear" being the operative word.