Compare and contrast the charts below, on the one hand there is a nice rise in US Bond yields (which is making markets jittery - of course, should be the opposite, but what do the machines and algo's know,eh?). This is a sign at last of the end of the Financial crash, 11 years after it began. Historically that is about right, for major financial crashes. Interestingly though on a longer term view, US yields still need to go above around 4% for them to be at 'normal' levels. That may be possible this year with Trump's pump-primed US economy kicking into gear. 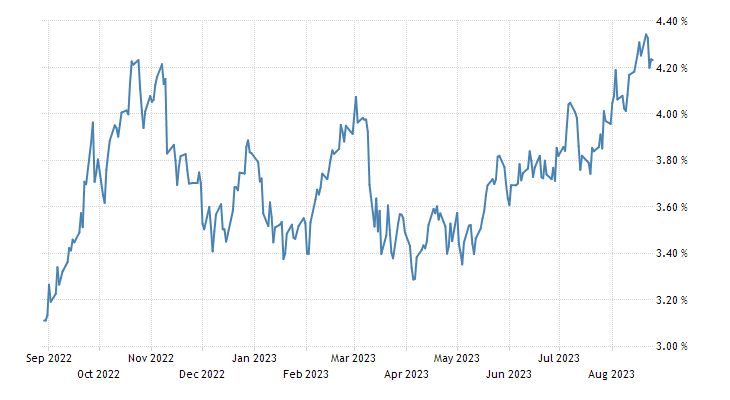 Let's hope the more nervous and sclerotic UK economy can follow in due course. ﻿ www.nationaldebtclock.co.uk - it's going to hit £2 trillion any day now.

and isn't consumer debt up over one and half trillion quid too now?

If the Americans do push bond prices down, and the UK does 'follow' (as opposed to doing a 'Japan'?) at what rate will refinancing our unpayable debts cause too much of an issue?

Did you see Aberdeen City Council have issued a 0.25% coupon, index linked £350m bond maturing in 2054? It's to build a white elephant conference centre to replace north sea oil.

They'll have to refinance about a billion when everyone who made this deal is dead or retired. Maybe interest rates will be 20% again. Who knows? Who cares?

It's probably not time to start talking / worrying about debt again yet. Mid 2020's - the next 'big one'.

"Did you see Aberdeen City Council ...": do municipal debts in Britain have the backing of the Treasury? Presumably not?

"Did you see Aberdeen City Council ...": do municipal debts in Britain have the backing of the Treasury? Presumably not?"


I cannot really help, either.

DMCs, councils indebtedness but it is a problem I've pondered on and off since the bliar/brown terror,.

As you say and I agree "presumably not"

Hmm, so many councils are neck deep in an ocean of debt, debts that can never, realistically, be repaid, add in their; salary burden, pension schemes, crazy accounting + rampant peculation, in the pockets of the major property and construction giants, stuck with an army of apparatchiks and a social services a corpulent ravenous monster eating money......... and the whole 'local government model' shebang looks, well er, like a future financial catastrophe.

It is all a ticking financial clusterfuck, yet, the cover up and pretending goes on, while, the public are led up the garden path.