Needless to say, the lower headline, 'coal on the way out', applies to the USA.  It would apply to most of Europe, too.  But there it stops.  It's the top item that matters, of course, if anyone's counting.  Which I'm not sure they are. 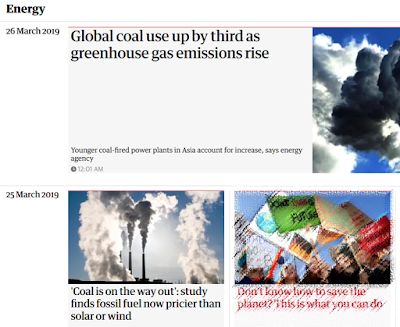 By the way, although da kidz may not wish to hear this during their school strikes, one of the 'ways they could save the planet' (bottom right) would be to stop online computer gaming.  That's now using so much energy globally, special data centres are being built for it, similar to bitcoin mining.  (And as for FB etc ...)

Coal is not on the way out.

We've just outsourced all of our muckiness to China and bring back the goodies on the Christmas Toy Barge.

When does it set sail, BQ ??? It's rumoured that Christmas is cancelled because of Brexit. Greenists should LOVE Brexit !

ND: "would be to stop online computer gaming. That's now using so much energy globally, special data centres are being built for it"

Surely having one large computer is more energy efficient than lots of little ones? It's not the transmitting of data which is using the electricity is it?

Therefore the conclusion should be stop computer gaming. Perhaps they could drive to the cinema instead.

Glad you bought this up ND. I saw this and despaired.

EK - no one is making china build coal plants. They are quite capable of building nukes and have a huge solar industry. Anything trying to blame it on the west or ourselves for outsourcing is baloney.

CU - We are well informed here and it is hypocritical for a greenist to demand the closure of serviceable coal power stations here only for them to buy goods manufactured using dirty power elsewhere.

I would add to ND's Young Greeny's boycott of gaming a boycott on cheap fashion outlets selling goods manufactured using dirty power. They can't even do this let alone bother to turn out to march on their day off rather than a school day - all they are being taught here is left wing hypocrisy and do-as-I-say-not-as-I-do when they tell us what we should and shouldn't be doing.

In Britain, coal has been largely replaced by gas and wood as a fuel. This is not so in most other countries.

The repeated claim that solar and wind are cheap is a fraud. It omits the cost of keeping gas or coal power stations on standby for the times when the sun doesn't shine and the wind doesn't blow. Claims that these gaps in output can be filled by batteries are absurd.

The Chinese are building nuclear power stations as fast as they can, and the Russians are exporting them to a number of countries. Nuclear is the answer for the medium term, and over the next few decades the most healthy economies will be those with the most nuclear power. Expensive to build, cheap to run, extremely safe and reliable.

Don - wood is a retrograde step even from coal...Drax what a massive fraud on both the taxpayer and the environment that is!

Agree re nuclear, but disagree on renewables as the subsidies thrown at the industries are hugely reducing the costs (free factories will do that for you!) which in turn means they are becoming competitive - yes the grid power issue remains. But nothing requires coal to be burned in 2019, gas LNG gas is more or less free and far cheaper than coal.

Subsidies don't reduce costs to the consumers. They simply pay part of the bill to the power supplier and part as taxes to the government, which passes it on. I resent being forced to subsidise wind farms. I don't mind subsidising nuclear.

I doubt very much if LNG is "more or less free". But it should be cheaper than coal or lignite, and less polluting.

At the other end of the transmission line from the generator are the local networks neded to distribute that power. Up until now, for the past 30 years I've been in construction, the power cos have done a good job of passing on the costs of upgrading their local networks to developers.

I've lost count of the times my clients have had to fork out £250k for a new substation and HV cable, even on quite small jobs. Typically the development uses 40% of the new capacity, the balance is available to the power co to meet incrased demands generally on the grid. The big London schemes in recent years - Crossrail, DLR extensions, water and sewer ring mains - must have given the power cos hundreds of mills of free new distribution infrastructure, much of it at the taxpayer's expense.

All good so long as long as the economy is growing and there are developers about to pay for it all without charging consumers extra. But what happens if domestic demand keeps growing when the economy isn't? It may be self-regulating, a recession meaning lower consumption, but that seems counter-intuitive in many respects.

Raedwald - I'm seeing lots of projects predicated on the assumption of perpetual growth.

I think it's this policy "Keep cramming the country full of people and prices will continually rise."

But to make it work depends on state subsidy though it's not always called that.

the trouble is, some of the people who get the jobs ...

(it's getting better, though: the need for subsidies is diminishing fast)