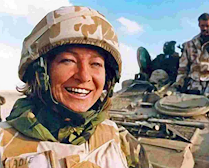 ... a question for Mr Drew. We recall how Norman used the media. Smart bombs and footage we’d never seen before. 'Luckiest guy in Iraq’ crossing the bridge before it was destroyed seconds later. Did Mr D have any involvement with the media? Contrasted with the Vietnam catastrophe of open media. The very closed Falklands war coverage, gulf war press coverage at the time, was seen as a triumph for all sides. Did the coalition deliberately feed the MSM leaks? Or was it just a lucky happenstance?

The lucky aspect was the leadership that was in place at the top.

As I've noted before, there was a real danger: our comms were so good, and so much info was available real-time, that meddlers at the top (as many politicians are) could have wreaked havoc.  Bush and Major weren't having any of that.  (I might add that certain politicians amongst our allies were agitating for access to the real-time stuff.  They were not indulged.  I have a strong feeling that Thatcher herself, by 1991, would have been a nightmare.  But we shall never know, because she too was not indulged over her request to "let me stay on until Kuwait is re-taken".)

Concomitantly, the meejah had a lot of excellent resources of their own: commercial satellite comms had reached a fairly advanced stage by 1991 (even if the US could shut them down in the blink of an eye); and after all, this story was a media-magnet nonpareil.  So there was no point in doing anything other than co-opting them wholesale via "embedding" of correspondents at selected points at the sharp end, and giving them a fair amount of access and reporting freedom.  And an embedded correspondent is not entirely a free agent ...

They revelled in it - almost everyone is much taken by the military when they meet it in person - and of course were soon in love with their minders.  (I might add that some of the minders were soon in love with Kate Adie, who is a very game lass; and can take a joke, too - quite important with the soldiery.)  We'd learned this with the Falklands - you might add WW2, for that matter - and instincts in the USA were the same.   So we were all officially up for providing and facilitating prime-time visuals.

The media angle was, in fact, central to what we did, not just a bolt-on extra.  To illustrate.  In the twice-daily live-streamed tele-briefings for the War Cabinet, there were four parts: Operations (including meteorology, always critical for the military); Intelligence; Diplomatic; and Media - what was being covered and commented in the press etc.

I'll end with a funny, and deeply revealing story.  Items 1, 2 and 4 on that running order were prepared and presented by the military; item 3 by the Foreign Office.  We knew we had to get these briefings just right - to obtain what was needed from the War Cabinet, and to give them enough (but not more) for what they needed in turn.  Being simple soldiers, we reckoned it was best to leave nothing to chance; so we rehearsed the material meticulously, and asked non-specialists in beforehand, to tell us if we were using too much jargon or skipping points that needed more explanation.  It worked really well (and again I give credit also to Major, who chaired things brilliantly).

But not the w*****s from the FO, who fancied themselves as being able to wing it.  On the very first briefing, their man just had a few notes instead of a proper script.  He made an arse of himself.  The difference between the stumbling *smart* FO man and the crisp simple soldiers was rather stark.

They had a different frontman next time.  And the new chap had a script.

I came across this YouTube channel recently. Some good "timeline" videos.

You met the "Angel of Death" Adie and lived to tell the tale. I'm impressed

All very interesting. Thanks.

A great series to follow Nick keep them coming. They are a breath of fresh air compared to the relentless 24h nonsense that passes for news during these difficult times

Thanks ND.
The oil Wells burning was a scene I recall. And the machine that blew them out like candles. The eco disaster of running the pipes into the Persian gulf. And the Scud attacks. The real worry Israel might strike back, fragmenting the alliance. Turkey’s pulling out, disrupting a major strategy. The incredible success of the readiness a d combat worthiness of modern NATO AirPower. 100% return from that first sortie of thousands of planes. Something unlikely to happen even in peacetime. The bigging up of the stealth bombers and Patriot. Radar artillery.
The CNN newsmen being heavily criticised for stating the opening of the air attack over Baghdad looked like a firework display. Which is exactly what it looked like.
The media visuals were impressive. And sanitised. No young cambodian girls running along the street, burning with napalm.
I recall, even at my 25 years age, that most of the journalists seemed to know little about the military. What the equipment was for. What it did. How it worked. There were many examples of people simply repeating the briefing. Something political journalists would be unlikely to do, without first asking what was not being briefed. What was being buried, etc. The military correspondent, I thought, lacked much knowledge of history. Weapons. NATO. Cold War tactics, anything, really. But I still thought the press were better then than on Covid.

I recall, at the end of the campaign, the clamour to stop the bloodshed came very quickly from the media. Once they had seen the carnage on the highways leading back to Iraq.
I believe this ultimately helped stop the war, just before saddam would have been toppled. The war wasn’t quite won when the mission suddenly ended.

And, against the odds. Hussain survived the aftermath. Leading ultimately to the unnecessary disaster of Gulf War 2.

@ most of the journalists seemed to know little about the military. What the equipment was for. What it did. How it worked

Bill, there was one hilarious example I may build into another episode. The media had been briefed that one of Saddam's innovative defensive tactics was digging trench-networks connected to oilwells, and at the last minute turning on the taps to fill them with "thousands of barrels of oil"

The Sunday Times duly came up with a graphic of their own devising, showing stylised trenches with lots of tiny individual "barrels" occupying them ...

Eric from Chilwell said...
You met the "Angel of Death" Adie and lived to tell the tale. I'm impressed

My oldest as a schoolkid ran into Kate Adie near his school in Bristol. "Oh, you're Kate Adie" said he. "Piss off" said she. Class act.

The sobriquet Angel of Death may well be reallocated.

Our first Royal suicide in the making ? And I don't mean a female one. It is clear who has a serious mental disorder and it ain't her.

E-K yes, the poor fool will be SO SHOCKED when she loses interest in him. It will be "sudden" and "without warning" and there'll be nothing he can do.

The heir and spare are now accomplished. He's about to be cuckolded. Exiled, alone and in superficial La La land with no mates and no purpose.

The BBC are really running with this racism angle and loving it. Over what ? Not a single shred of evidence.

Harry is ill. It is quite clear to see.