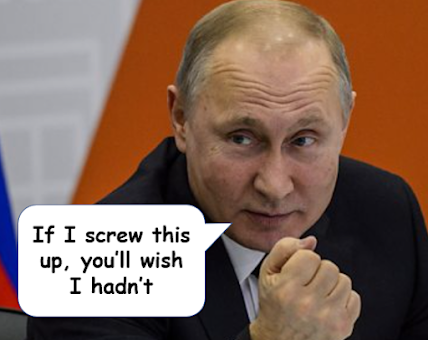 Forget NATO's conventional capacity. Putin has stated that he is going straight to WW3 if we interfere - whether he screws it up or not. Now interference includes sanctions.

Putin is not about to be murdered or deposed by his own.

It's WW3 or appeasement and we have been at fault all the way.

(Putin hasn't undertaken conscription for the numbers needed to invade wider Europe which gives lie to the "He'll take us all over" crap.)

Can't help feeling that Nato and Russia will be shooting at each other within a few days. The Ukranians are doing their best to draw Nato in and some Nato governments are trying to get involved without provoking the Russians too much. I suppose the most hopeful precedent is when Turkey shot down an Su-24 in 2015 and WW3 didn't start. Let's hope that the very least we have to suffer is petrol at over £2/litre.

It's beginning to dawn.

- Xi stopped Putin invading until after the Olympics

- Xi knew about the invasion

- Xi is the only person Putin sees as above him and whom he listens to...

Is Xi about to broker a deal between NATO and Russia and save us all from Armageddon ?

Is Putin playing the psycho who's lost the plot here ? China's tool ?

It would be exquisite of the Chinese, wouldn't it ? At a cost of course. Their usurpation of the West taken without a shot fired.

Relax, stop worrying. Everything will be back to normal in a week or two. Boris has a six point plan - sorted.

If I were a Tory councillor facing re election come May I might be feeling a little bit queasy. Never have the Tories looked so useless, so absolutely corrupt. The alternatives may be pretty useless too but one will need a strong peg on the nose to vote Tory.

Assuming of course that the elections do not get cancelled due to 'an international crisis' - or there being no Westminster any more.

jim said...
Relax, stop worrying. Everything will be back to normal in a week or two. Boris has a six point plan - sorted.

If I were a Tory councillor facing re election come May I might be feeling a little bit queasy. Never have the Tories looked so useless, so absolutely corrupt. The alternatives may be pretty useless too but one will need a strong peg on the nose to vote Tory.

Assuming of course that the elections do not get cancelled due to 'an international crisis' - or there being no Westminster any more.

I can't see this voter ever voting again, whatever the election. It has been made abundantly clear that it makes NO difference who is elected. Vote Conservative. Get Socialist, Woke addicted "policy" and a never before witnessed emptying of the taxpayer's pocket.

They can all fuck right off.

BTW, have you read the released Pfizer docs? Enough to make you shudder.

Pfizer KNEW Cominarty was going to kill and maim many.

Here's ONE page of the adverse reactions recorded during initial trials. There's NINE pages of this. NINE

@Jim
Relax, stop worrying. Everything will be back to normal in a week or two. Boris has a six point plan - sorted.

Relax, the deal will be one of the quickest and easiest deals in history. We have all the cards

That levelling the entire country plan is running on time and to budget.

And the other side will pay for it !

- giving the russians 90d to get their money out
- refusing a visa to a ukranian because they need to provide biometrics and at the time of application (before the war started) the ukranina chose Kyiv as the place to be registered, and that cannot be changed
- turning a few hundred ukrainian refugees away at calais because they dont have visas

Which does fit in nicely with a narrative of a corrupt, incompetant and plain mean government

you can add flat out lying.

>you can add flat out lying.

This is Boris we're talking about. Words have no meaning for him, he just says whatever sounds good. The same applies to the six point plan for Ukraine.

More importantly to those of us who aren't wealthy elites...

Hasn't anyone put together that wealthy elites are taking decisions which will further impoverish ordinary Brits and Europeans? The US will be relatively unscathed (they have their own oil and gas), though oil prices will hurt.

But in Europe a proposed oil and gas embargo will do much real harm - things were bad enough as it was. We're talking 1970s - but in the 1970s life was still pretty good for all except pensioners - not the case now. Houses and heating were affordable then, we didn't need minimum wages.


Now house prices unaffordable, landlords doing well, real wages static since 1997, heating and eating now a real concern for many. Let's embargo an area with 30% of wheat production, lots of oil and gas, fertiliser production - are we still stumping up for the former ICI plants to produce? - it's a perfect storm.

And apparently all new housing in 2 years will be heated by heat pumps!

"UK gas prices opening at 610p/ therm for April delivery. A thirteen st. dev. move. No economic modelling conducted in recent months will be capturing the rotation in spending power away from UK households."

Of course there's a simple answer to this. Formally announce no NATO in Ukraine, ever - Russia withdraws to Donbass/Crimea, announces full damage restitution, NS2 to go ahead.

But that wouldn't involve decoupling Russia from Europe, so the US (who run NATO) would rather impoverish Europe.

(Yes, I know "they started it, but as Sir Roderic Lyne, former British ambassador to Russia, warned a year ago, “[pushing] Ukraine into NATO […] is stupid on every level.” He added “if you want to start a war with Russia, that’s the best way of doing it.”)

"A year ago, gas was trading at around 40p per therm"

Only gone up fifteen times then! Makes petrol and my oil-fired heating seem like a bargain!

All those new estates with gas heating...

The only mistake the Ukranians have made was in deciding to fight.

They didn't have to exactly welcome the Russian toops with flowers but they could have accepted the takeover. Then they would still have somewhere to live in their own country and would have food and petrol etc as before. There wouldn't have been anyone killed or turned into a refugee.

After the invasion would have been the time to start an underground resistance movement.

Am I the only person to have considered this possibility? Too late now of course so we probably have WW3 to look forward to.

Jan. Who knows. Putin might have relaxed, a more moderate President taken over once he retired/died.

Go back further and all Ukraine had to do was remain neutral - they wouldn't have been invaded at all.