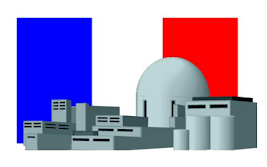 So EDF won't (and, by itself, can't: it's bankrupt) take construction risk on nukes any more (Part 1).  But it needs to parlay its supposed expertise into anything that can defray its appalling future liabilities and monetise its sunk costs - at other nations' expense.  Hence, its relentless pressure on HMG, (a) to proceed with Sizewell C, and (b) do so on a completely different financial footing to that of Hinkley Point C.  Oh, and (c) HMG must put its hand in its pocket right away to fund the ongoing engineering, because "EDF has almost run out of money".  And HMG has agreed.

The new finance basis will be "Ratable Asset Base", whereby approved developments call on guaranteed periodic payments from, well, taxpayers ultimately**, during the construction phase.  The logic is, this reduces risk to the point where cheap institutional finance will swing in, attracted by the state-backed cash-flow stream.  By "reducing the cost of capital significantly" vs the "commercial" margin EDF claims it needs to charge in return for taking construction and cash-flow risk on (e.g.) HPC, the overall cost - which was always to be borne by UK bill-payers anyway, if over many more decades - is brought down by a noticeable amount.  In capital intensive sectors, attracting the least-cost capital has always been vital (true).  As a throwaway line it is added that RAB is how loads of big infrastructure projects are financed in the UK and elsewhere (true): and of course almost the whole of the US utility sector has been built on this basis (also true).  How heartening!

Heartening for the French, maybe, but open to many heavyweight challenges.

This is just the headlines of the RAB stuff:  I'm not even talking about the massive strategic issues of (e.g.) China having a 20% stake that needs squaring away; and whether a large chunk of deeply uncertain nuclear capacity commencing probably 10 / 11 / 12 years from now (who'll ever have a firm handle on that?) can contribute meaningfully to a national electricity requirement which places an ever greater premium on reliability, flexibility, and certainty in both these vital dimensions.   Still less am I addressing the plethora of SZC- and East Anglia-specific environmental issues involved, which themselves are multi-dimensional and acute.

And yet, HMG ploughs on regardless.  As we said at the end of Part 1:  FFS, why?   Some suggestions towards an answer in Part 3 ...

** I say 'ultimately taxpayers' but in the first instance it will probably be electricity bill-payers.  Not a huge amount of difference, in practice.

EDF is in negotiations with the British government over penalty clauses in [the] agreement struck in 2013 to finance the building of [HPC]. The subsidy deal guarantees EDF a price [for] electricity it produces for the first 35 years of its life ... Penalty clauses ... reduce the 35-year term if Hinkey is not generating electricity by May 2029 [by] one year of guaranteed payments for every year of delay up to 2033. If the delays extended beyond that date the government has the option to terminate the subsidy contract. EDF ... has repeatedly pushed back its completion date while costs have spiralled. In the latest setback, EDF warned ... that the first of Hinkley’s two reactors would not be completed until June 2027 .... [and] the company cautioned that there was the possibility of a further 15-month delay to September 2028, adding that date could slip again ...

Also EDF don't plan to build any Sizewell C type EPR reactors in France, that's only to be foisted on foreigners now. They are designing the EPR2 for France, same power but easier and cheaper to build, learning from the experience of (v.slowly and problematically) building 5 EPRs abroad (+1 in France).

To be fair, if EDF wanted to build the first EPR2 at Sizewell, which technically and time-wise could make a lot of sense, they would have to first go through the 4 year UK Generic Design Assessment process for the new design. And they urgently need to find some work for the French new nuclear industry to do while they finalise the EPR2 design, and Sizewell C oh-so-conveniently fits that bill.

HMG doesn't seem to realise it has quite a strong negotiating hand with EDF at the moment, and is just rolling over to the nuclear lobby as per normal.

Sizewell C would take so long to build that it's a pointless in the context our short and medium term pickles.

So I'll add it to HS2 as just another thing that needs to be cancelled.

Come on, chaps, let's see whether we can get both Rishi and Liz to promise to scrap them!

And can we get them to promise to permit the West Cumberland coal mine, fracking everywhere, and new drilling in the North Sea and elsewhere?

This is a one-off chance. Exploit it.

Don’t scrap cross rail.
Expensive and overrrun for sure.

But a significant boost to all once built.

You don't have to be Andy Burnham to think that the £31 Bn cost of Crossrail 2 might be better spent outside London.

The UK (London excepted) is very far behind in international comparisons of rapid transit.

The UK (London excepted) is very far behind in international comparisons of rapid transit.

And one of the biggest reasons for the uk lagging behind the france & germany on productivity is our collective inability to get the skilled person to where the skilled job is quickly and cheaply ... outside london.

That and adult training and the cost of housing.

There's a classification problem there: I've travelled on the Newcastle metro.

Correct. There's a light rail metro system in Brum & suburbs, 14 miles and expanding; & here in Croydon (!) we have 17 miles of light rail / tram

- and we're NOT London, in case you were about to suggest otherwise

The Wikipedia list uses the UITP (L'Union Internationale des Transports Publics) definition of a metro system. The Newcastle Metro is really a modern reincarnation of the North Eastern Railway electrics from 1904. Like the Liverpool and Glasgow (blue train) electrics, it's essentially a suburban commuter rail system, rather than a true metro. If you include modern tram systems (Sheffield, Birmingham, etc) then the UK has a reasonable number of rapid transit systems. Still comes out poorly in international comparisons though, and the rest of the country compares poorly to London.

@DJK: Are you really suggesting the Newcastle metro can't be a "true metro" because some of it consists of old lines converted to modern uses? That's daft.

Here in Brum, they've pulled their finger out to get some of the Metro up and running in time for the Commonwealth Games.

Principle cause of the delays in opening are some epic (and expensive) foulups in the planning and implementation;

Is there anyone anywhere that can do this sort of thing without going over budget and over schedule?

From my perspective, all of these public transport boondoggles seem more of an excercise in rinsing the tax-payer.

Another thing to consider is that most of these schemes seem to be a modern implementation of the tram system that existed back in the 50's and 60's, ripped out at great expense in favour of the automobile.

I suppose if you live long enough you realise that there's nothing new under the sun.

Al-Jazeera has a useful report on nuclear builds in Asia:

West London electricity grid has hit capacity meaning no new homes - but people have to buy electric cars because new internal combustion cars will be illegal.

The joined-up thinking of madmen.

Look forward to the conclusion in the end-of-season cliff hanger post!

I think we really (saying it quietly) owe Russia a debt of gratitude. They did the right thing, if for the wrong reason. They’ve shown how negligent government (and you can extend the blame to governments going back twenty years or more) has been in looking after energy supply. Neoliberals took to seeing how everything could be obtained from the great, endlessly bountiful supply chain, which always and every time would deliver whatever it was you needed. In seeing the whole world (and the U.K. economy) like some kind of Amazon Prime account, where you could just file a Purchase Order and, lo and behold, what you wanted would be delivered. By someone else.

I suppose it was understandable (though not forgivable) to think energy worked a bit like that. It doesn’t, of course.

Not sure how exactly we can begin to get ourself out of this mess. For me, I’d say get digging that coal (from U.K. mines) and burnt in modern coal fired power stations with flue gas desulphurisation. Of course, you’re looking at five years before you see your first joule of energy going into the grid. That’s if we started tomorrow. Which, we won’t.

concluding episode at the weekend, Chris. Years ago on this blog - 2007, no less - in response to an "OK, smartarse ..." question, I listed the Drew energy policy, below, in which the new generation of ultra-super-critical coal featured prominently

on the whole I think that policy has worn well. And been ignored, of course ...