Comedy is getting old 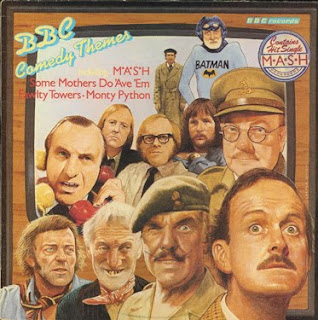 No Question Time today ..Hurrah!
Having fallen out of love with the BBC, I was involved in a blog post war on another site over privatisation. The person most in favour of the BBC claimed that the ten most popular UK comedies were BBC productions. This was probably a reference to the top 50 British sitcoms.

This is probably true. If you take television over the last 60 years then the BBC has a monopoly for 20 of them, a duopoly for another 10 and very limited competition for another 20 before Sky and Virgin and C4 + C5 got their act together. But if the poll is ALL TIME WORLD greatest comedy/sitcoms how does the BBC do?

Not so well I'd guess. 8 out of the 10 BBC shows are over 25 years old. {but then the poll was 2004..anyone got a newer one?} Not that that matters much, but it does mean that some of the 'newer' comedies from other sources are likely to give the BBC a run for our money. For me, here's a possible best ever.


So lets see. List your top BBC & NON BBC comedies into the comments and see if can come up with a top 20 best ever. I have a sneaking suspicion my BBC favouring opponent may have been right.
Posted by Bill Quango MP

Email ThisBlogThis!Share to TwitterShare to FacebookShare to Pinterest
Labels: Media

Reggie was one in a million.

Easily favourite is My Family.

Then..
Two Ronnies
Morecombe and Wise
Only Fools and Horses
That was the week that was
Up Pompeii
Benny Hill
Hancock's Half hour
Bless This House
On the buses
Rag trade

The oldies are the best. Don't care much for modern sitcoms.
Which might prove your point?

Sgt Bilko was the blueprint for most of the modern comedies for instance the Father Ted Eurovision episode was a rework of a Bilko episode.

Blackadder
Seinfeld
Bilko
Porridge
Simpsons
Fast Show
Jackass / Dirty Sanchez (does that count - it's proper funny?)
Yes Prime Minister
The Day Today
Spaced
Have I got News For You (seriosuly, soz)
The Thick of It.

Hmm...not very good on lists but..

No mentions for Little Britain then
or One foot in the grave?
Had forgotten about Butterflies :)
Definitely Blackadder almost any.
And where is Spike Milligan huh?
We laugh less now I'm sure, but then I've largely given up TV as a bad job...

What a bizarre list... you don't include 'Curb Your Enthusiasm' but you do include that limp homage 'Lead Balloon'. But at least you didn't include Last of the Summer Wine. That show died long before the cast.

SW: It is a bizarre list.
I took it from programs that I have on freeview recorder or box sets, confirming that I would have an above average liking for those shows.

Curb your enthusiasm I like but don't record it or have a of dvd it for later... so i don't like it enough. Dad's Army, OTOH, would be and one foot in the grave would make top 30.

We aren't getting very far though..
Are modern comedies from across the spectrum of program makers or from the BBC? Inbetweeners, that I haven't seen, is always being tipped by friends as a real winner.

And few votes for Only fools and horses, regularly voted Britain's favourite comedy program of all time.

- Was it right to disclose Julien Assange's bail address ?

- Should the US be suing BP over the oil spill ?

- Should the human rights of foreign criminals come over those of ...

EK a winner I reckon.

The Day Today, nothing touches that for political satire and the fact mostly it came true even thought it was supposed to be a nightmare parody.

Also the best US shows are tops in my book, Seinfeld, Larry Sanders, etc.

The best BBC commedy shows of this era are by far the children's shows. They leave adult TV standing. I would include:

- Sorry I've got no Head
- The Slammer
- Horrible Histories

There are many others. The standard is brilliant and way better than what we had as kids.

What about Armstrong and Miller ?