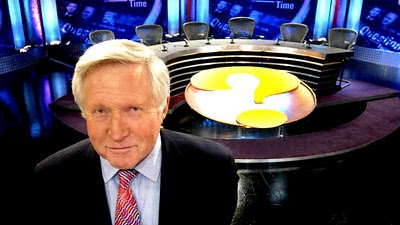 David Dimbleby is joined in Eastbourne by a producer who is too clever by half and has actually assembled a parody of a QT panel that belongs on Not the nine O'clock news.

Baroness Warsi, { Once labeled anti-gay by Labour. How will she cope with the ugly sisters?}
Chris Bryant, { Ultra annoying political version of Graham Norton, only without the latter's understated subtlety.}
Simon Hughes,{ Another run out for the anti-government, government minister. Can be good on his day.}
Caroline Lucas { the only green in the village.} and
Kelvin MacKenzie. { The right-wingers, right winger.}

BQ feels very ill, so will probably not watch. And Mrs Q has organised a paddy day party too. So double ill. Answers may be taken from twitter.
Update 18/3/11 {few changes - Malcolm still rules}

BQ chooses -
1. Should Britain ban nuclear power
2. Is the no-ish fly zone too little, too late.?
3. VAT on fuel. Is labour right to pretend they weren't going to do it as well?
4. Should Hague have personally made sure rescue workers can get a visa for Japan?
5 Should we worry more about racial equality in Midsomer or the fact that the murder rate is 50 times the UK average?
Posted by Bill Quango MP

a very familiar-looking panel, haven't most of these been on already since christmas?

anyway, here's my guesses - compilied without peeking, but a bit simliar to Mis CD and BQ.. is it going to be a predictable week?

Should we quit building nuclear power stations?
--- kelvin will say more people died in the tsunami than all the nuclear accidents put together

Was it H&S gone mad that prevented that UK team from helping in the earthquake?

Surely it's time to intervene in Libya?

Is the government about to U-turn on the NHS reforms?

Have the Midsommer murders finally been ended?

1. Nuclear disaster in Japan, ecomomic disaster in UK?
2. Are we repared for nuclear emltdown / thames flooding etc
3. Compare no acttion against Libya whilst Saudi send in the troops to support it's favourites - our inaction is it no balls or no forces to carry it out? UK vs EU
4. NHS cuts (a perenial favourite)
5. Fuel spikes - how will we cope - cut VAT on fuel as suggested by Balls

oh can I squeeze one more in - Would AV stop the worlds natural disasters?

Are too many children being forced to attend schools they never wanted to go to?

Is there further point in pretending there is any way at all the UK will leave the European Union?

Should mortgage-holders continue to be subsidised via low interest rates?

Should coal miners have been bought-off rather than laid-off now we can see nuclear power stations damage all of us not just industry workers?

Would it be convincing for a black elderly man to play Juliet?

Can we ever trust GPs again? NHS cuts

Can we ever trust what scientists tell us on energy sources? Fukushima

Can we expect oil to continued to be supplied at reasonable levels?Bahrain

Can we ever trust the EU and the UN to get its act together? Libya

Can we trust TV producers to accurately portray an English village?

Avoid all of them. They all relate to serious hazards.

Have members of the Panel completed the Census forms?

Hmm, not much happened this week to choose from!

1) Has to be along the lines of: Should Britain re-asses it nuclear program in the light of the situation in Japan?

2) What do the government do now as it seems like Gadaffi is winning and we supported the rebels (if only half-heartedly)? and or the belated no fly zone.

3) Should the government U-turn already given the new jobless totals?

4) Given the state of NHS funding how are Eastbourne's hospitals going to afford to recruit extra staff? (DYOR)

5) Some one will mutter something about Midsomer murky racial madness messing with middle England! or possibly(throwaway), should the Police be called to stop two little girls picking Daffs! Are there no other adults about?

3
Will England get a grand slam

Well, with poor Japan dominating the headlines its hard to know what else has gone on really. Still here goes...

1) What is the UK energy strategy now? Nucs & windmills or windmills & candles?

2) Are benefit cuts racist? (A Labour front-bencher said this week that they were & Baroness W took exception)

3) Libya - Too late to do anything useful?

4) Pensions (Public Sector & State) - could raising the state pension allow some affordable compromise with the unions to be reached?

[hmm - I've not got high hopes for my score this week!]

4. Libya - pathetic americans, hang on wait, how do we blame tories for obamamessiah f*ck ups - agrhh (probably blackout at this point). Qaddafi is a Tory anyway, as is Blair etc.

5. AV vote, how can lib dems cope with getting snubbed by miliband. Whay are tories always on the wrong side of everything?

I'd love it if someone could ask this question:

A 41 year old nuclear reactor gets hit by a 9 magnitude earthquake, then slammed with a 20ft tall swell, followed by an explosion due to the buildup of hydrogen gas that blows off the roof of the building, and the core is intact and contained. and your telling us nuclear power isnt safe?

1) Is nuclear 'wise'?
2) What we gonna do if Gadaffi slaughters everyone in Benghazi like dogs?
3) The GP's say we need NHS U turn when will the government listen?
4) Should the government stop the cuts because of the Earthquake?
4) Midsomer Murders is it PC gone mad?

Tonights predictions are in honour of Baroness Warsi...

1. Have the nuclear power stations that we inherited from deficit-denying Labour put all our lives at risk?

2. Has the indecision we inherited from deficit-denying Labour mean that a NFZ over Libya will be too late if ever? Bonus points to McKenzie for blaming foreigners, and to Warsi for blaming Labour for the dismantling of armed forces.

3. Labour introduced the market to the NHS, the BMA is full of trots, despite the deficit we inherited, we're spending more on the NHS than Labour, etc.

5. OK, I've had enough of that game. If the average graduate earns £100 extra for having a degree, and has to pay back 83K for his/her education, is there really any point to going to university anymore?

by rights only japan / nukes should be discussed for the entire prog, but hedging my bets a bit ...

1) japanese nukes / nukes in general leading to ...
2) UK energy policy (could go either way for Lucas, there is scope for green-baiting here)
3) budget / fuel duty (well it has to come up sooner or later)
4) midsomer / only-gay-in-the-village type stuff, warsi invited to speak for offended minorities everywhere on pain of being declared a coconut
5) libel law reform

Only saw bits of first and last q. Lucas didn't get as easy a ride as I would have thought. Also sanctimonious of Eastbourne. There aren't many 'whiter' parts of south east England.

Q1: In light of the developments in Japan, should Britain now abandon nuclear power?

Q2: With Gaddafi’s troops pulling ahead of rebel forces in Libya, should we now intervene?

Q3:Will Lib Dems improve their standing with the electorate if they stand firm against NHS reforms?

Q4:Is it acceptable for TV dramas to have an all white cast?

So the 4 bonus rule applies.

Botogol - powerful 4{+.5 for the panel. I see on twitter there has been a FOI request about panel's fees. Implicitly..are some on too often?}- 4.5

Timbo614 - A good 4. {good try with the yoof jobless too. Maybe next week in the budget special}

Steven_L - 4 bullseyes. {No bonus for trying to trick me by you having two number fours.} -4

Winner are Measured and Botogol who get the chance to add a single tax of their choice to next week's budget.

:-) I'm closing in on the formidable Malcolm

a new tax? Well, surely the time has come for a Tobin Twitter Tax? 0.1p a tweet sounds about right, the TTT would be a tax on the garrulous, hypothecated for the benefit of the silent majority.

Should you reject all this, BQ, I will settle on imposing a tax on every written word (£50 a word) on every road sign and building sign, such as those that state Warning!, Letterbox, Wind Farm, Speed Humps, Traffic Lights, Width Restriction, Anti Climb Paint, Welcome to the London Borough of Socialists, Bus Lane, Nuclear Free Zone,... you know the ones. Reluctantly I would concede that simple place names, advertising hoardings and building sites would have to be exempted. They would still have to argue their case though.

Hey, I have greatly enjoyed this prize. Thank you. :-D

Both approved. See Mr Osborne for a chitty before next Wednesday.

Well, that went better than I expected!

BQ: As you may have guessed the pension question was another (wildly unsuccessful!) geographical gambit. I thought: Eastbourne = older age structure => increased pension interest ... or not as it turns out!

1. War in Lybia
2. Unemployment on the rise
3. Lacaol government
4. NHS reorganisation, yet again, go back to Matron it seemed to work well then.
5. Should UK recosider the building of more nuclear power stations

Thanks for the endorsement, BQ.

'cause without a proper energy policy more of our people are going to snuff it than through any reactor mishap.

Comparisons with Japan are all disingenuous.