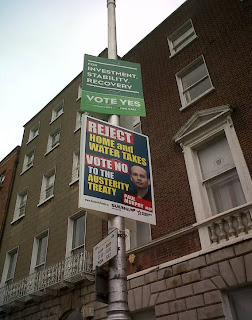 While we await the outcome of Mr Q's poll of polls, let's consider another imminent democratic dénouement: the benighted Irish are having a referendum on the European 'treaty' on 31st May.

Some like to think that they will confound Brussels, though this time Guido is a bit tentative.  Of course, the Irish have form on this: come up with the wrong answer and they are simply sent back to vote again until they get it right. Being put under all manner of pressure, with the main parties pressing hard for a 'yes' and making lurid threats.  Noonan the Barbarian, in particular, has offered vast tax increases and job losses if they don't do as they are told.

I've noted before that the Irish seem rather crushed at the moment, and this sort of thing looks like a pretty clear straw in the wind. So you'd have to guess it'll be 'yes'.

Of course the obvious retort is - so what ?  No-one knows in detail what's being voted on: the French & Germans will re-write the Treaty as they see fit, as often as they see fit.  We shall return to this sorry story when we know Sarkozy's fate - and doubtless many more times besides.

They still want the EU to bail them out so they will vote yes as usual. Their votes are bought and paid for.

So much for Irish independence.

Wait and see what the Greek and French elections bring. This couold easily sway the background mood as to whether the irish wish to wag their tails at the EU proposals.

As Anon above and independence, it's not often I agree with Gerry Adams but when he said he didnt spend years fighting the British to be ruled by the EU he was right ...

One of the things i've never quite understood about the Irish is how they fought so pathologically to rid themselves of British rule and yet they are so supine in the face of rule by Brussels.

If they were voting on a treaty with the UK and about being dictated to by London there wouldn't be any question as to the outcome of the vote.

The Irish fought hard to be independent and a self-determining people only to give it all up to be ruled by a group of people, if truth be told, whose attitudes, behaviours and values are more different to them than the British.

Norway voted decisively today with real money. It was a big win for the GETTHEF**K OUT QUICK Party.

Hovis, Gerry and the Bombmakers. A great group whose events used to go with quite a bang. Wonder where they all are now..

There are no such people as "the Irish".

Gaelic Catholic Irish Republicans fought against British rule, and eventually managed to secede from the United Kingdom in 1922, to create an independent state in Southern Ireland.

There are now twice as many Irish Catholics in Britain as in the Irish Republic, and hundreds more
arriving every month.