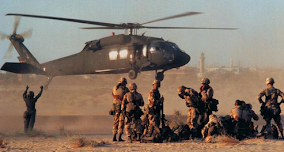 At the end of February 1991, after a month of intense and purposeful air activity of the shooting kind, Desert Storm moved into the decisive land engagement that Saddam Hussein had already tagged "the mother of all battles".  He directed what was probably the fourth largest army in the world at the time, and without doubt the most recently combat-experienced.  The Coalition, so carefully assembled by George Bush Snr, fielded ground forces adequate to the challenge, in what promised to be the biggest tank battle since the Kursk salient in 1943.  Hotter weather was on its way: there was a serious imperative to get on with the job.  You'll find no shortage of accounts of what followed, from border skirmishes and the French advance on the left flank, through the retaking of Kuwait, to the final halt on the road to Damascus, 100 hours of fighting later: but I want to concentrate on a fascinating element of the first phase of the main assault that well illustrates the high quality of the Coalition generalship.

One of many big problems faced by the Coalition was always going to be logistics.  The distances and desert going involved; the ultra fuel-hungry nature of the heavy M-1 and Challenger tanks; the allies' determination to use artillery to the full; the huge quantities of drinking water needed in the desert; and the anticipated (indeed, necessary) rapid rate of advance - all spoke to a critical logistics dependency, as is often the case for swiftly advancing armies.  How to ensure this was managed successfully?

The answer was an imaginative piece of logistical genius that probably only the Americans are capable of (though below we'll consider a British precedent).  Instead of having logistics trying to catch up with the front line, it was decided to have the leading armoured units fight their way towards already-established logistics bases behind enemy lines, deep in the Iraqi desert.  This was particularly relevant for the wide left hook on the western flank, where the distances for advancing forces would be greatest.  The first of these, Forward Operating Base Cobra some 80 miles into Iraq, was to be established on G-Day itself, 24 February, by the legendary 101st Airborne Division - all made possible, of course, by accurate prior air reconnaisance and a very substantial fleet of attack and transport helicopters.

They deployed in the biggest heliborne assault ever mounted, against a carefully chosen, lightly-defended Iraqi location.  Not only was the resulting FOB Cobra a logistics base for following units, it was a jumping-off point for further bases set up even deeper into Iraqi territory over the following three days.  The concept was excellent in design, and successful in execution.

You can read about it here and (in a soldier's rather deficient English prose) here - and of course much more besides that you'll find for yourself on the www.

Is there any precedent for such a strategy?  Well, airborne forces were of course used several times to capture bridgeheads in WW2, not least on D-Day itself and, perhaps with greater similarity in Market Garden later the same year.   That latter plan was to establish a fighting base behind enemy lines towards which armoured forces would fight.  But even if Market Garden had worked out as planned, there wouldn't have been any pre-arranged supplies waiting for Guards Armoured when (if) they'd arrived at Arnhem.

However, students of the Peninsular War might identify an early C19th parallel.  For some time Wellington operated from secure bases in Portugal, with relatively straightforward replenishment by sea.  In 1812 he won the critical battle of Salamanca, followed by some messing around before winter set in.  As the 1813 campaigning season commenced, he pretty much had the French in reverse gear; but his lines of logistics were inevitably going to be strained significantly if he intended to clear the French from Spain entirely.  Which he did.  The French, by contrast, enjoyed interior lines of communication, as retreating armies generally do

Always one to think things through ahead of time, Wellington's strategy was masterly.  As part of a specific diversion campaign along the north coast of Spain and the French coast on the Bay of Biscay, the Royal Navy captured Santander on the north coast, then opened up Bilbao.  For the decisive battle at Vitoria (in the north east of Spain), by using Santander as FOB his overland lines of logistics were 400 miles shorter than had he continued to be supplied from Portugal.  (The sea passage from Britain was 400 miles shorter, too.)  A prototype FOB Cobra.

He didn't have helicopters, though ...

Footnote: for those whose attention tends to wander, this is Gulf War ONE we are talking about.  1991.  Bush Senior.   John Major as PM ...  OK?

Fuel, artillery shells, water - all pretty heavy commodities. How do you get those into dumps way behind enemy lines?

The Chinook has a fairly formidable payload - 10 tonnes - and although a 1950's design [sic] is still in production: RAF has just ordered another batch.

(Generally, and amazingly, airframe technology hasn't advanced much from the 1950's, though of course avionics have changed beyond recognition)

Chinook and B52 both still going.. unlike the Bristol Belvedere and Vulcan.

I was told Vulcan was grounded because the airframe was past its allowed hours - well the last B52 came off the lines at end 1962. How come they're not all grounded?

Looking it up it seems that the cost of support and spares did for Vulcan, though the airframe was also a concern. But surely airframe must be an issue for B52s?

New wings! They rebuild them. Like the broom that has had three new heads and two new handles: or ships' hulls in the era of wooden vessels

I can see new Vulcan wings must have been a bit of an ask...

You'd think the bit where the wings join the fuselage would be an issue too, lots of stresses there I'd have thought. Even if you don't chuck them around there are air pockets and storms.

I am very fond of an account of the peninsular campaign in a biography of Wellington written by the wife of loopy Lord Longford (remember him?).

She was loopy too. Early on she devoted some space to the genealogy of the Wesley family (a spelling of Wellington's surname). Then she admits that he wasn't a Wesley at all: his family had been Cooleys who had changed their name after an adoption by a Wesley.

Anyhoo, The Duke. It was a great pity that Eisenhower and Montgomery didn't copy him by taking Antwerp as swiftly as possible in the summer of 1944. Do training courses for senior officers bang on about that mistake? They oughta.

"he wasn't a Wesley at all: his family had been Cooleys who had changed their name after an adoption by a Wesley"

Surely Cooley is a very Irish name? So he was born in a stable and he WAS a horse!

No, he was a Colley, which is an English name.

"The Colley or Cowley family had come to Ireland from Rutland about 1500 and produced a line of Crown servants and soldiers. "

Helicopters and LOTS of space to choose to land them in.

Brilliant. It might have been so easy to 'fight the previous war' again and fall into that trap.

Special forces. I was wrong to suggest that China would use genetic modification. They will choose artificial selection to produce special forces troops instead.

We could do the same and do so ethically.

I've asked this question before: why are the Chinese, so ready to be drilled, so crap at team sports? Xi, they say, loves soccer and presumably would give his right arm for China to have a team worthy of the name. Can't imagine resources or fitness would be an issue

I recall our friend Mr Weetabix has worked in China and has told us (if I'm right) of how they go to pieces in a crisis, mostly rushing around trying to avoid blame. I suspect dynamic team sports require exactly the opposite type of behaviour: the ability to cohere intelligently in a crisis, keeping heads & rushing round taking responsibility for figuring out, then executing, solutions

The Buddha tells the people he can fulfil only one of their wishes. Someone asks: “Could you lower the price of property in China so that people can afford it?” Seeing the Buddha frown in silence, the person makes another wish: “Could you make the Chinese football team qualify for a World Cup?” After a long sigh, the Buddha says: “Let's talk about property prices.”

"So he was born in a stable and he WAS a horse!"

You are alluding to a statement attributed to The Duke. Like so much Irish history it is fake.

The Duke's forebears had a surname variously spelled Cooley, Colley or Cowley, according to Lady Longford.

Nick, this link "and (in a soldier's rather deficient English prose) here" is to a file on your hard drive. Can you please post the web link?
Thanks, JG

Ah yes, sorry about that.

It's a cached file from US military records (an excellent source, as praised here before) - see if this works

I followed the link and when I get there it claims its own address is ...

@ND: that is exactly so. They are not cool headed in a crisis, and avoidance of blame is everyone’s primary concern.

"They will choose artificial selection to produce special forces troops instead. "

(Off topic - Tesco tried and failed in the States, Walmart tried and gave up in the UK with Asda. What's Lidl and Aldi's secret sauce, because AFAIK they are both in the States? Maybe it's because they are private not public, private companies seem to have more long term strategies)

I also think there is the issue of a sense of humour in a crisis. Not simply to be able to keep positive in such a situation but to be able to think tangentially in order to get out of it.

I think competitive team sports require individuals who have a complex mixture of attributes;
able to operate independently as autonomous units (and in friendly competition with each other), but are also good at second guessing each other and playing second fiddle to others on the team for the greater good when necessary.
It's a mixture of traits that Northern Europeans and Anglo Saxons especially excel at, others (Indians, Africans, Chinese) not so much.