Desert Storm (8) - the Halt on the Road to Baghdad 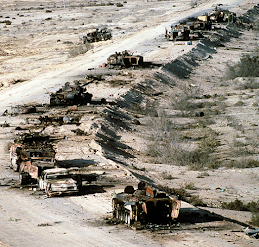 30 years ago, the Coalition had eventually launched its ground offensive to expel Saddam from Kuwait, having used the many months of planning-time well.  The huge and (in its better units) capable Iraqi army was well dug-in, and as ever, had devised some genuinely innovative defensive tactics.  Particularly creative and noteworthy was the digging of a system of forward trenches fed directly by Kuwaiti oil wells: at the opening of a valve, the trenches could be flooded with crude oil and set on fire, creating a genuine obstacle as well as a tremendous smokescreen, that staple of tactics since WW2.

But notwithstanding the solid core of battle-hardened units, stiffened by the highly committed Republican Guard, much of their army was bulked out by raw, ill-trained conscripts of low morale.  The whole force had been degraded by weeks of exceptionally vigorous air attack.  And everything out in the open was fully reconnoitred in detail, with nowhere to hide.  The Coalition had a plan for everything they saw in front of them.  In "the biggest tank battle since Kursk", wherever the front line Iraqi units were not swiftly and remorselessly crushed (in some cases, literally) by the well-planned ground offensive, they typically showed a willingness to fight only for an hour or so, then surrender.  The number of willing prisoners, and speed of overall enemy collapse, surprised the already confident Coalition forces, who nonetheless had the leadership and logistical wherewithal to capitalise on it and steam ahead.  You can can easily find plenty of fulsome further reading material online.

It's pretty well known that massacres happen during rout, when an army turns its back and flees.  This is exactly what occurred at the end.  The Iraqi rabble that evacuated its newly-annexed Kuwaiti territory and fled north to Basra was caught in the open and, for a few hours, mercilessly strafed.  The result was predictable carnage and I'm choosing not to rehash some of the truly gruesome "Highway of Death" photos that adorned newspaper front pages the next day.  (Wiki doesn't, either.)

We've discussed before the vulnerability to air attack of vehicle columns, not least in the context of equally famous photos of what the Israelis periodically used to inflict, particularly on the Syrians who must be unusually bad at convoy discipline.  To be fair, it's not easy at the best of times - and in the desert, pretty damned impossible.  The only thing to do is break the convoy into packets of 5-6 vehicles, which ain't gonna happen in a rout.  The Germans in WW2 were the acknowledged masters of vehicular discipline in conditions of zero air cover, particularly in Italy: but (a) Italy isn't quite such hopeless terrain for the job, and (b) which other army has ever had the discipline of the Germans?  (I was once leading a packet that was part of a gigantic RAF convoy on exercise in Germany, supposedly being conducted under wartime "tactical" conditions, and the whole thing was an hilarious farce - subject of a story for another day.)

A day later, President Bush (Snr) called a halt to the Coalition advance into Iraq, a long way short of Baghdad.  Some say the carnage played a part in his decision.  There was much hoo-hah about this:  why didn't he allow Schwarzkopf to finish the job?  Or at least spend another 24 hours degrading Saddam's military capabilities still further?   (Given that politically this hoo-hah may be said to have led to Bush Jnr's crazy essay at Gulf War 2 the following decade, it's a fair question, and an interesting, multi-dimensional strategic counterfactual to mull over.)

But Schwarzkopf, true soldier-of-a-democracy that he was, obeyed the political instruction to halt without demur.  All credit - massive credit - to both men, I always say.  For months, Bush had stayed out of real-time military meddling, which many another president wouldn't have been able to resist.  (Hitler never could.)  But Bush was always on the ball: and at the end, he was crisply decisive.  The military respected the ultimate political authority.  That's the way the bargain should work in a democracy at war.

We'll look at what happened next in another episode.

At the time of the Highway of Death, an uncle of mine (who'd never before discussed WW2) revealed that he'd been part of the closing of the Falaise Gap, part of which involved his 198 RF Typhoon squadron taking out trains heading east clearly marked with Red Cross symbols.

He'd been briefed that these trains were falsely marked & so were a legitimate target, but ever after wondered if the Germans had somehow turned the tables & managed to defeat the Allies in Western Europe, would he have faced charges as a war criminal.

My father mentioned the Falaise Gap to me. He remembered the stink of dead men and dead horses.

I'm probably repeating myself but before the war Dad shot (wild-fowling); after the war he did not (except to teach us to shoot a rifle).

Bush the Elder seems to me to have been the last competent, adult President the USA has had.

Could that be a consequence of the collapse of the USSR? Did it liberate people to vote for frivolous candidates?

I think sensible, competent people are thin on the ground. Management is difficult, and managing a whole country or Empire is extremely difficult.

I'm sure defeating a second world country with first world military with minimal losses was a great thing (and I don't seek to minimalise that) but the fuck ups that ensued ( the invasion of Iraq without consideration of consequence and the subsequent disasters of babyish intervensions in the ME) and the total economic annihilation by means of a Chinese flu (aka not ebola nor black death) has made us an uber bitch of the East...

You're making this sound like it was a last US military hurrah. Which it probably was. Nostalgic even.

I think this series should be expanded to make a short book.

I agree. I would buy a book of your military adventures for Christmas presents.........and to read myself of course!