China Exports, US $ and UK GDP all point to more QE - and higher markets 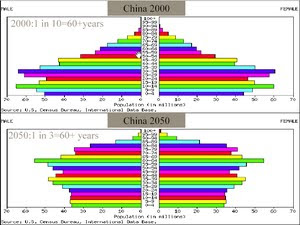 China announced a huge rise in exports yesterday, which has helped to lift the limp World markets. However, these huge exports are the result of a mercantilist policy that is keeping the world unbalanced. As the EU and USA have sunk in record quick time, the Asian Countries need to rise.

This is generally done through exchange rates, ours will fall (along with our living standards) and theirs will rise (to their populations joy). This after all is the fair reward for all their hard work.

However, the Chinese Government is determined to grow its economy at a superfast pace, over 10% a year. it fears its impending slow down as the country ages rapidly as a result of its one child policy (see picture). Other Asian economies take their lead from China.

How can the US and UK get any growth going when they can't find Asian export markets due to the artificial currency differentials? Well, they can't. The US in up in arms about this, the UK not so much as the Pound has fallen.

The answer though will come if the situation is left. The US and UK will keep their economies from a double dip by unleashing more Quantitative Easing; it is the only tool they have left. Cut the deficit and print money. Of course who suffers - holders of US Treasuries - the biggest of which is the Chinese Government.

Whilst this macro story is interesting (and I will do a post soon on the insanity of the current German government too) the story for us is thus. Deflation will not be allowed to run, there is nothing to stop it - no interest rate rises etc. We are out of monetary tools. So instead QE and inflation will be used to prop up the economies of the US and UK if we start to falter. Remember what happened last time this was done - asset prices rocketed.

Ignore the naysayers who say the markets are going to go to new lows for ages - it just won't be allowed to happen.
Posted by CityUnslicker

If the Chinese are unwilling to play the exchange rate game (a fundamental part of global capitalism), shouldnt the Western nations be clubbing together to enforce a trade embargo until this resolves. Ihs not just the first world nations that suffer, as China's fast growth comes at the expense of other developing nations.

You can print money but you have to find people willing to buy it, otherwise it is a pure nominal change. The UK/US need China and others as a buyer of Treasuries and Gilts more than China needs the UK and US.

I have never understood why western governments are so happy to allow China to screw us. They are not our friends, these people, and they have a long term plan which is not to our benefit. To give one small example: they are very happy to import raw materials, but it is becoming increasingly difficult to get raw materials - such as metals - out of China, due to tariffs & quotas. Expect the supply of rare earth metals - for which China is presently the only source - to be gently choked off over the next few years. This will be industrially crippling. There used to be a source of rare earths in the USA, but the Chinese suppressed prices for long enough that the mine closed. That wasn't a accident and it took years to take effect. Deng Xiaoping once said rare earths would be to China as oil is to the Arabs, and he wasn't wrong. You name a modern industrial application from superalloys to mobile phones and they all have one thing in common - consumption of rare earth elements.

If they are going to crank up the presses again gold and silver will be the assets of choice methinks!

The US can revalue the Yuan unilaterally by increasing import tariffs...

I'm not sure I understand why people get so excited about Chinese currency manipulation. China can't keep on denying the inevitable forever. The Chinese economy will either suffer inflation or demand will have to be dampened by other domestic means.

Inflation is a huge political issue in China (the price of meat regularly causes riots). Something has to give somewhere.

SW - very pertinent points re Rare Earths, a subject I will put on my to do list.

Anon - You have highlighted the game, I think it is a game of chicken and we will see who blinks first. personally I don't think china would be very happy to see all its precious labour to produce the money for the treasuries incincerated via inflation; but we will see.

CU, I think you are basically right, though possibly a tad optimistic.

Deflation means it is best to be in cash, but we continue to have inflation so that means gold, shares, property etc, are better. If our lords and masters are wise (and capable) they will balance the system to produce flat property prices with mild general inflation.

China is another matter. Others have pointed out the predatory nature of Chinese industrial expansion: undercut until Western manufacturing goes to the wall. This is one of the main reasons why I have argued on this site in the past that strategic national interests must be considered.

SW - There are plenty of reasons that nobody will really stand up to China: i) even with all the barriers and tricks there is still a HUGE amount of money to be made from an economy that will be the worlds largest in a few decades - nobody wants to miss out; ii) nobody cares about manufacturing jobs - ship the jobs out there for lower wages, bigger profits and cheaper flatscreen TVs; the US govt owes China quite a lot of money...

Totally agree that deflation will not be allowed and the effect that will have on asset prices - we're having a bit of a wobble right now but massively negative real interest rates mean only one thing - BUBBLE!

I think you're all missing the point on government borrowing.

For example, this 'green investment bank' will probably just be a government off balance sheet borrowing machine that issues bonds to UK pension savers, the money will get spent on windmills and then inflated away.

The government will try to take more control of the situation, but it is the madness of crowds (politicans included) that will take over.

As for China, that's one big crowd of people over there!

CR: "huge amounts of money to be made out there". Hmm. Having done business out there for nearly 20 years I have to say it is on their terms and not easy to get your money out. And don't even get me started on IP.

The potential size of the Chinese market causes people to be blinded by their own greed. How will we pay for these goods from China? Selling each other cappuccino over the internet? Mark my words, eventually the city/service jobs will go east too. We will end up like the bankers of Lombardy.

We are steadily turning ourselves into a sharecropper economy.

SW: you're right, people are blinded by greed - just like they bought tech stocks with infinite P/Es because of the 'potential' of the internet they see nothing but the 'potential' in China or the railroads or tulips....but I'm sure that if our economy is heading for the toilet in 20 years, our politicians will have the foresight to do something about it...

My understanding of free markets is that they work and are of benefit because they reward behaviour and investment that increases overall wealth.

At some point - with all the pricing manipulation that's been going on - the market signals that encourage wise investment / discourage malinvestment are going to stop working and we're all going to get poorer no matter how high our shares go.

We can already start to see these perverse incentives in the steps that have been taken to keep boomer couples in their large houses at the expense of cutting science investment and education.

We'll be a nation full of large houses but not have anyone capable of developing the next generation of technology.

I'm very much of the view that not having debt, not being tied down owning a home or with a missus and kids in one place and being able to get up and move to wherever the work is overnight is the best position to be in right now (for me anyway).

Quite what incentive this creates in terms of working people not procreating and non-working people doing as much as possible to maximise their welfare take is the most worrying long term trend.

No they'll be kept artificially high ... for now.