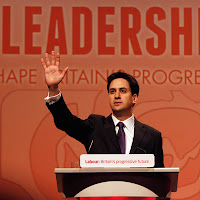 Labour have swept the board. Ed Miliband deserves congratulations. It was a great success. 854 new councillors, quite widely spread across the UK. I never thought he had it in him!

We’ll let the papers tell you why windturbine Tories did so badly. Lets have a quick look at why Ed’s Labour did so well.

Firstly, the low turnout was a massive boost to an opposition party. In some areas the vote was so small it was basically a fight amongst activists. Its much easier to get worked up against the government than for it. All incumbent parties suffer this. Especially midterms. Obama was given a similar sized boot in his. It doesn't diminish the success. But it did make it easier.

Secondly, this is a result fought over a pre-coalition background. When Labour last contested these seats they had to fight the protest party of the Lib Dems as well as the Tories. Then the liberals were the anti-Browns. Now the Liberals ARE the Tories. Labour is fighting on only one front. The message is its US vs THEM.

Thirdly. The total incompetence of the government in the last six weeks. Not one decent headline. Its almost as if the pre Mandelson Brown cabal had wandered back into office. A budget disaster. Pasty stories. Murdoch. Hunt. Fuel crisis. Qatada. Posh boys...
Any government can have bad luck, but to make their own bad luck is unforgivable. Why did the Tories tax 100% rock solid blue pensioners just before an election? Why did they do the half hearted tax cut to 45%? It cost them the positives of the taxation threshold rise without the gain of bold headlines for tax cutting.. It wasn’t necessary to do it now. Why not next year?
Miliband had the misfortune of the Ken tax story but that’s a local London matter, and it cost him his hat trick. But as the Tories have cocked up, labour have cocked up less. Miliband managed to avoid to much flak from the Galloway shock.  The misjudgement of Tom Watson to plug his book, hasn’t had much impact on anyone. Opposition don’t have to say much. If anything. Tony Blair won a landslide without having any policies at all. Ed Miliband took that lesson on board from his first day.

Fourthly – The media. This was just fortunate for Miliband but he didn’t upset the right wing press, which allowed him to exploit it. Since the budget the Tories dropped about 8% in the polls. That was a real drop where voters giving the benefit of the doubt decided they’d had enough. A daily negative press about Cameron, Tories, government, Liberals  and cock ups reinforced the rich vs poor, they are incompetent narrative.. Front pages with queues of foreigners stuck in an airports wouldn't normally upset the Daily Mail too much. But they went berserk. Weeks of damning headlines.
If this were a real election the right wing press would have been much more partisan.

That doesn’t mean that Prime Minister Miliband is something we will be hearing in 3 years time.
Mid terms don’t mean much. The Liberals have now taken their final hit across all those angry voters who felt cheated by the coalition agreement. They won’t sink much lower. They are now at core. Elections are an uphill climb and each new seat that labour needs to take from the Liberals and Tories is steeper than the last.
The good UKIP councilor gains don’t net them any MPs. In a real election, when not voting blue probably does mean a vote for the red, voters will be less likely to give UKIP their preference. Especially if Cameron finally acknowledges the Euro split within his party and does something about it.

There are still three years to go. A lot can happen. The economy might come good. The SNP might struggle..or do better. The Liberals might find a reason to get people to vote for them again. Europe’s instability might have blown up or calmed down. So the result isn’t that important in the long term.

But for Ed Miliband it is still a very, very good result, And one that he can use to show that he can generate support and can get people out to vote for him. The coalition have allowed Labour back into the game. And so made the 2015 election much, much closer.

Email ThisBlogThis!Share to TwitterShare to FacebookShare to Pinterest
Labels: Policitcs

"Front pages with queues of foreigners stuck in an airports wouldn't normally upset the Daily Mail too much."

Under a more efficient Labour administration they could just walk straight in !

I agree there have been too many mistakes, cock ups and U-turns, even I have given up on the current Tory? lot.

My only mistake in my (unwitting) mayoral campaign was to assume that people had longer memories, and were not quite so reactionary but, ho hum. As noted elsewhere my favoured UKIP actually did quite well vote wise, so maybe there is hope for an aware electorate yet.

A repeat of 1981. Dave is heading for a one term administration unless he finds a 'Falklands Factor' to offset the voters desire to be believe leftard lies about the parlous economic and social situation of the UK.

There can be various legitimate conclusions as to why 70% of the electorate have disengaged from politics.

There can be only one conclusion as to why the Tory have disengaged from their electorate.

Quoted by Richard North, written by Peter Hitchens: "Mr Cameron is not a secret patriot waiting for the chance to rip off his expensive tailoring and reveal his inner Thatcher. He is exactly what he looks like, an unprincipled chancer with limited skills in public relations".

It is time the Tories ditched the posh boys that do not know the price of milk. Cameron is a disaster; the Tories had a chance and blew it. Really, what is the difference between the Boy and Milliboy?

Well, I will voet UKIP from now on, have doen the past 2 elections. Tories are enacting nearly the smae policies that Labout would anyway. PLus with this whoel 'coalition' era it could well be Labour Libs anyway.

The only way to change is to start again, if UKIP do well enough some Tories will start defecting.

.....or push for the likes of David Davis/John Redwood etc to be listened to a bit more. Maybe it's time for them to be a little more forceful.

I voted UKIP in the last few elections also.
This logic of Bill Quango doesn't wash anymore.
"In a real election, when not voting blue probably does mean a vote for the red, voters will be less likely to give UKIP their preference."

BS mate, Cameron is no different to Blair.
Voting for Blue gives you red whether they win or lose.
Better to let a real red party win and get the blame for the fk up instead of the right getting the blame for the leftwing policies of their leadership.

The problem with supporting the leftwing Tory wets is they act as a block to prevent a real right of center movement.