Why is Ed Milliband panicking his way to the end of the election?

"We wants it, we needs it. Must have the precious. They stole it from us. Sneaky little hobbitses Tories. Wicked, tricksy, false!"

I return from a short break (I have really enjoyed this missing out on tons of election coverage as the parties try to have an election without any commitments at all!) to find Ed Milliband has turned into Gollum from the Lord of the Rings.

Gollum, in the books, is captivated by the Ring, the source of power. All is subsumed to its acquisition and though there is an inner battle, everything is sacrificed in the end for power.

In the past week, the true Milliband-Gollum has come to the fore. We all know he started this terrible path to power by ruining his own family by beating his more talented brother with the help of the union barons.

Fast forward to this week and he is truly desperate. Most of the Labour lines are about 'hidden' Tory plans to smash the NHS. Pure lies in all likelihood with no way of proving any of them. If anything the Tories are as cornered as everyone else by the mammoth NHS spending requirements.

But the lies pour forth with increasing desperation. Not content with just campaigning on a lie as the central theme of his campaign Milliband has gone futher.

To the depths of meeting with narcissist and anarchist Russell Brand - in search of unregistered younger voters to try to convince with the made-up message of the Labour Campaign.

Together with this of course, is is 'set in stone' pledges made last week. 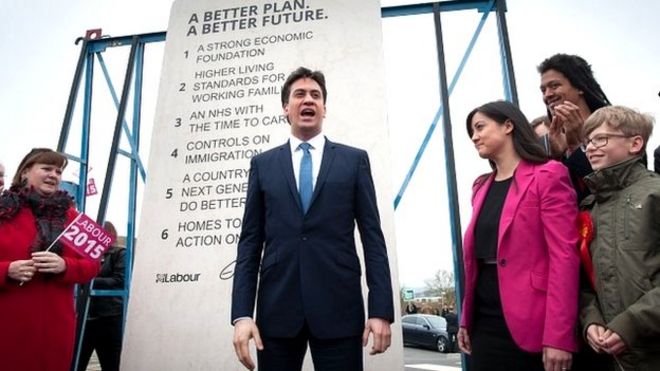 This stunt has to be the worst I have yet seen - factless statements written into stone. Carefully chosen to avoid any Nick Clegg type disasters where commitment might late come back to bite you.

The only thing all of the above tells me is that Ed Milliband is really, really desperate for power. Of course, having ruined his family he personally has the most to lose from failure. But Gollum he is, willing to sacrifice everything to his insatiable appetite for power.

If he does win, this all leads me to think he will quickly degenerate to Gordon Brown levels of idiocy and bad leadership, so consumed with his own 'journey' which he mistakenly thinks this that of the country too.
Posted by CityUnslicker

Ah yes, the Big Outright Lie, this is straight from the Ali-Mandy 'Desparation Straits' songbook

remember the last week of the '97 campaign: Blair lowers his voice, winds up the trembling lip, injects the note of close-to-breakdown, and haltingly delivers the mighty porkie: the Tories are going to scrap the state pension!

It really is hilarious. Surely only the most die-hard Labour loyalists, and those who have somehow managed not to see any coverage at all over the last six+ weeks, will be voting positively for Ed.

If this was a less serious game, I would enjoy seeing a minority Ed government being bounced around by Alex.

It is true, but deeply misleading to refer to David Milliband as "more talented".

"Less of a twat" I could forgive.

Guido has it that his useless election coordinator (picked, one assumes, because she doesn't piss herself laughing whenever he's on the stump) has traduced the stone carving as merely being indications rather than, yer know, commitments - so that's alright then. I always wondered what 'set in stone' meant and in this neologistic world, apparently it's now synonomous with 'bugger all'. Tally ho - to victory and don't spare the horses!

It takes a rare kind of idiot to stand up in front of a nice, easily-photoshopped slab of stone with his electoral pledges on when the general public have already mostly taken it on board that election pledges mean nothing. Indeed, a court case has already established this fact.

Yes, Edwina Miliband's a cupid stunt and showing her knickers which are in a twist. The scum party are in for a mighty fall, no way will they poll anything like 30 odd % and Milipeed her panties. I would guess a percentage of mid to high twenties.....

Not before time, the UK is calling time on the Islamist appeasement party. The "we see nothing" in Rotherham, Derby, Bradford, the gang of Common PURPOSE, the long marchers, the bottom feeders of the progressive communists. Now, Foxtrot Oscar off and take your Hope not hate, SWP and UNITE union, Harriet and Jack, Kinnochio's and Jack Straws boys and stuff it where the sun can't shine.

mention of UNITE causes me to seethe: using details obtained by their members from my mother's pension fund records they rang her up to urge her to vote Labour

(I don't really know why I was surprised...)

Our electoral system has long had the potential for a real disaster to happen in the governance of the UK. Is this the year when it will actually come to be?

Well an overhaul is long overdue, that is for sure. However, I will go out on a limb here and predict that the result will not be nearly as close as the polls/media are suggesting.

The labour supporter on left is the CEO of British Union for the Abolition of Vivisection. PPC for Bexhill.

After 100 years of trying (and subsidy) the BUAV is still going and taking the cash for their CEO.

I also understand all the supporters received a commemorative copy of the stone for their gardens.

Friday competition? What can you do with a 10ft slab.

The tombstone, the shrill NHS warnings, the Brand interview...

This isn't to appeal to you, dear readers. You're never going to be converted into voting Labour, are you ?

Labour voters aren't reading The Sun nor the Daily Mail.

The Beeb are still giving Miliband an easier ride than he deserves.

So how is this going to stop Labour voters voting Labour ?

I think his support will hold up in so far as Labour supporters who have swung to Ukip have already done so.

Believe me. Working in a Labour environment Ukip are hated by Labour voters such has been the "Ukip are racist facists" rhetoric.

Not a good move by the Tories and their press really:

a) because it isn't true

b) because Ukip would be taking more Labour votes than Tory ones by now.


I'm expecting a Tory LibDem coalition by the end of the week with Ukip having some deniable but definite gravitational pull.

That suits Ukippers fine because:

a) Ukip in power is bound to disappoint

The country would be ungovernable.

This was never a push for power, only for influence and to redress the democratic deficit.

It is vitally important enough of us support Farage in order to stop the Tories lurching to the Left.

Can you eurosceptic Tories really not see just how useful a strong Ukip can be to you if you insist on having an unsplit wet/dry Tory party ?

If Labour win then please blame Labour voters, not us.

I'm not blaming UKIP.
At any time Cameron could have brought them into the fold.

he tried an election strategy that was just too long and just too wooly.